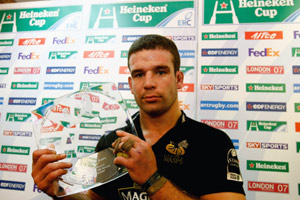 Joe Worsley picked up the man-of-the-match award for London Wasps 22-14 win over Perpignan, but declared there is still plenty of work left to do to make the quarter-finals…

But having been pushed all the way by a strong Perpignan side, Worsley knows only a win at Castres will put them in the last eight.

..“I don’t know what they feed them down in Perpignan, but they were the strongest team we have played in this competition so far,” he said.

“The year we won the Cup, we had to go down to Perpignan and beat them at home, it looks like we will have to go down to Castres and
get a win next week.

“It’s not over yet, there is still a lot of work left to do.”