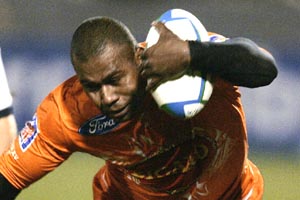 Rupeni was devastating as he carried the ball time and time again, breaking tackle after tackle on his way to earning the Heineken Cup man-of-the-match accolade.

“It’s never a surprise to see him break the line, it’s not even a surprise when he beats three or four players,” Stolz said after the match

“Its only surprise when he breaks the fifth tackle,” he said as he handed Rupeni the celebratory champagne.

“Ive been doing this for a long time and I don’t think anyone is going to stop me,” said the smiling Fijian wing after the 26-18 victory.

And praise for Rupeni was forthcoming from the opposition.

Centre Mike Tindall was full or praise for the Agen wing saying: “Quite honestly he is the best player I have ever played against.”

“Whenever he gets the ball you know something is going to happen. He is electric.

“We were just discussing in the changing room how strong he is and how dangerous he is every time he touches the ball.”

But Gloucester head coach Dean Ryan knew that despite the magic of Rupeni, his side were in touching distance of an historic win that would have enhanced their chances of quarter-final qualification.

“It was a ferocious contest that we got ourselves in to a position to win it, but a little bit of inexperience and missed opportunities cost us

“The game was really tight, and we believed all the way thought he match that we could win, but we worked hard to get into the match.

“I don’t think we have done ourselves justice in this campaign. Today it didn’t happen for us, but we are a young team and we will learn from this.”