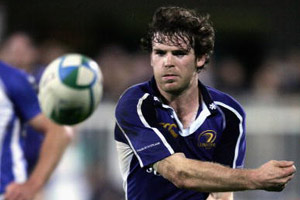 Leinster top Pool 2 four points clear of Gloucester Rugby and return to the pursuit of Heineken Cup quarter-final qualification on the back of a commanding 45-22 Magners League victory over the Ospreys.

“That game was good preparation for the match against Edinburgh and it is great to have guys like Gordon in such good form,” said Contepomi.

“He makes life easy for you as an outside half and, if you give him the ball in space, defences often can’t get near him, which is what happened against the Ospreys.

But now it is the Heineken Cup and that is a different story to the Magners League. We have to switch on for that, try to have a good game and a good performance and then, hopefully, the win will come.”

Leinster coach Michael Cheika added: “Perhaps there is a bit of pay back from our defeat at Edinburgh in Round 2, we were very disappointed when we left there and the body language of the players told the whole story – we let ourselves down and we should have won that match and finished the job.

“The team played well and there were a few outstanding performances against the Ospreys. Gordon was exceptional in defence and attack and we are lucky to have him.

“Overall it’s good for Gordon and Brian O’Driscoll to be running themselves into some good form before the Heineken Cup matches.”