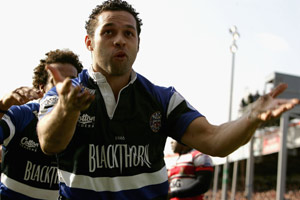 Bath Rugby travel to Galway to face Connacht Rugby on Friday night in search of the win that would take them into the European Challenge Cup quarter-finals... - 11/01/2007 15:10

Bath Rugby travel to Galway to face Connacht Rugby on Friday night in search of the win that would take them into the European Challenge Cup quarter-finals – but aware that any slip-up could be costly in their bid for another European title.

The 1998 Heineken Cup winners beat the Irish province 21-19 at The Recreation Ground back in October and are five points clear of Connacht but wing Joe Maddock is adamant that they will not be taking anything for granted.

“Obviously we are pleased to be at the top of the Pool but we are not going to be complacent about our last two matches, against Connacht and Montpellier,” said Maddock.

“We need to get maximum points to ensure that we not only qualify for the knock-out stages but that we also earn a home quarter-final.
“Connacht are very much your typical Irish side – we know that they will play a high level game and will be ready to play for the full 80 minutes. They will certainly not let go until the final whistle.
“They may not have the big names of Munster and Leinster but they are a tough team who will be looking for a win and will certainly be up for the game.
“This time they are the ones with home advantage and I am sure they will be even sterner opposition on their own patch, especially if their supporters get behind them.
“Our 30-19 win against Wasps gave us a big lift and has eased the pressure while our back-to-back European Challenge Cup wins against Harlequins have put us on a high note going back into European competition,” said New Zealand-born Maddock.
Bath Rugby have played 47 Heineken Cup matches in their seven seasons in the tournament and, with winning the European Challenge Cup bringing automatic qualification for the following season’s Heineken Cup, Steve Borthwick and his team-mates have everything to play for over the next two weekends.
“Over the last two seasons we have struggled for consistency and it seemed that we hit form in our European games and lost form for our domestic matches” he said.
“There has been no real reason for our disproportionate success in Europe and, despite the weekend defeat at Quins in terrible conditions, hopefully we are redressing the balance with generally improved domestic performances.
“However, there have been a lot of changes at Bath over the last few months.
“We went from having a coaching team which had been around for a good few seasons to having three different head coaches in six months.
“But now things seem to have settled down and we have an excellent coaching team at the club, the squad is really coming together as a group and our domestic performances are improving all the time.”