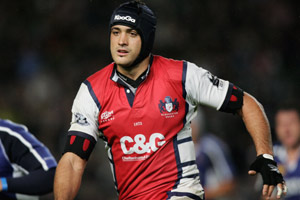 Marco Bortolami is expecting an emotional return to Kingsholm in the European Rugby Champions Cup. - 04/12/2014 14:58

Gloucester skipper Marco Bortolami has urged his side to take their chances against Agen on Friday night to maintain their interest in the Heineken Cup. ..

Bortolami insists victory is Gloucester’s only option if they plan to reach the knockout stages of the competition and set up a mouth-watering pool decider against Leinster next Friday.

Head coach Dean Ryan has made only one change to the starting XV that lost 20-19 to Sale last Friday – recalling Christian Califano to the front row and a reunion with his former club.

There are changes on the bench. Patrice Collazo comes in as front row cover and there is also a recall for lock Will James and a return for number eight Luke Narraway.

“Agen will play with big intensity, but we have everything we need to win this game,” Bortolami told www.gloucesterrugby.co.uk.

“We have only one chance now, and I think it’s the right pressure on the team. We have to perform and we have to win.

“Agen try to play open rugby so we have to be careful in defence and try not to give them opportunities to score tries as we did when they played here. They scored four tries from our mistakes.

“Last week at Sale we had two or three chances to score in the second half didn’t and lost by one point. We must not throw opportunities away.”