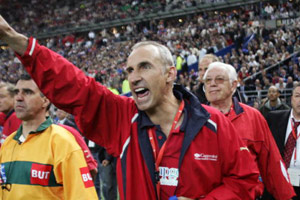 And coach Patrice Lagisquet has been there for the full half century of tournament matches to make it a double celebration for club and coach.

Biarritz will be the 12th club to reach the 50-match milestone and club stalwart and Test back row star Serge Betsen, who scored two tries in their first Heineken Cup match, against Northampton Saints on 7 October, 2000, is quick to single out Lagisquet for special praise in the team’s achievements.

“Getting 50 games in the Heineken Cup is great for Biarritz,” said Betsen as the Pool 6 leaders go in search of their fifth straight win of the 12th Heineken Cup tournament.

“We didn’t qualify for the competition until 2000 so it shows that we have been able to do well in the knock-out stages and it is a record we are all very proud of – but I’m a bit gutted that I only have 38 of those games.

“Having played in the very first season, I’d have liked to have a better record and if I had not been injured last season I would be a lot closer to catching up with Nicolas (Brusque).

“A massive amount of credit has to go to Patrice (Lagisquet) who has been with us since the start and it is he who had the vision and leadership to take us to where we are now.

“He has an amazing amount of coaching talent and his attention to detail has won us a lot of games while I’ve seen massive changes in my time at Biarritz in terms of our preparation for games and our attitude towards the tournament.

“We started off in the European Challenge Cup and the difference in our feelings about the tournaments between then and now is enormous – the Heineken Cup is a tournament so full of magic and we love playing in it.

“The games are very high quality when you look at them in comparison to the domestic competitions and it makes for an extraordinary odyssey for us every season.”

Biarritz have swept all before them in Pool 6 so far, collecting a try bonus point in each of their four games against Border Reivers (twice), away to Overmach Rugby Parma and at home against Northampton Saints.

“I know there has been talk of being the first team to qualify with 30 points, but we keep that out of the dressing room,” said Betsen. “First and foremost we are looking to win games and bonus points are just that – a bonus – and you can never take anyone for granted, especially with the quality of teams in the tournament.

“That said, we will certainly be going to Northampton in Round 6 looking for the win. We are very well prepared for the home game against Parma, which is clearly a must-win match, but there will be no question of resting players for the trip to Franklin’s Gardens.

“I know we have never won there, but this tournament is all about setting new boundaries and re-writing history. We want to beat Northampton and we will do everything we can to achieve that objective.

“And it is a fantastic time for us, especially our captain Benoit (August) in being called up to the French squad. It’s fantastic news for him and testament to the great job he’s been doing as captain of Biarritz since the start of this season. He’s presiding over a fantastic period of European rugby for us and it’s a great boost to the squad.”