Forrester to stay at Kingsholm 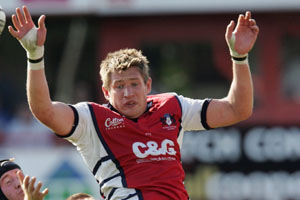 James Forrester, Gloucester’s dynamic number eight, has completed a new deal that will keep him at Kingsholm until 2010…

The 25-year-old England international has pledged his future to the club by signing a three-year extension to his current contract.

Forrester’s ability from the base of the scrum or the tail of a line-out is one of the most potent attacking forces in the Guinness Premiership, evidenced by the solo try that sealed Gloucester’s European Challenge Cup victory over London Irish in extra time last season.

The news is of huge significance to Ryan, who has already secured the services of youngsters Anthony Allen, Jack Forster, Jack Adams and Jonathan Pendlebury beyond next summer.

“I signed a three-year contract back in 2004 and I am thrilled everything has been completed really quickly again,” Forrester told www.gloucesterrugby.co.uk.

“As a group we are very clear about where we are heading. The coaching environment is really stimulating and the players are given the responsibility to go out and play attacking rugby, which suits my game perfectly. The training facilities at Hartpury College are the best I’ve seen at club level, so the whole package is there.

“It’s obviously a big year coming up for Gloucester and England, and this new deal means I can now just focus on playing as big a role as possible for both teams.”

Forrester made his Gloucester debut in the 2000-01 season and has gone on to make 108 appearances in all competitions with 31 tries to his name. Having played for England Under-21s, he made his England A debut against Wales in during 2002 and in June of that year also played for an England XV against the Barbarians at Twickenham, scoring a memorable 65-metre try and outstripping Jonah Lomu.

He was also capped by the England Sevens squad in 2002, playing in the opening World Series tournament in Durban and two others, and was man-of-the-match with two tries when England A thrashed Scotland 78-6 in March 2003. In 2005 he sneaked his first England senior cap, against Wales in the RBS 6 Nations, coming on as a blood replacement for Joe Worsley.

“We are all very, very pleased he has signed a new contract because James is the sort of international-standard athlete we want to build a team around,” said head coach Dean Ryan.

“James has tremendous natural ability but has also worked exceptionally hard on areas of his game that didn’t come as naturally to become one of the most dangerous and threatening attacking forwards in the game.

“Re-signing him just confirms our intention to keep taking this squad forward in the right way by securing top-class players.”