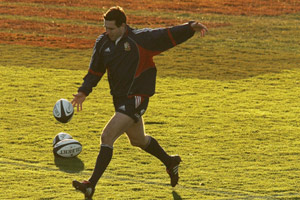 Stephen Jones is set to become the second highest scorer in the history of the Heineken Cup.

Wales skipper Jones has bagged a stunning 599 points for the Scarlets, as well as 37 for Clermont-Auvergne, in Europe’s top competition.

And he now needs just ten points against Ulster next Saturday to over-take Diego Dominguez (645 pts) in the all-time scoring charts.

Scarlets boss Phil Davies said: “He’s a world-class rugby player and a top-class bloke for that matter. He has been brilliant to work with, it’s great to have him back in the side.

“Stephen has proven over the course of time what he is capable of and he will do it time and again before he retires, which is a long way off.”

Ulster’s David Humphreys is the fourth highest points scorer with 554 but has been ruled out of next week’s clash at Ravenhill through injury.