Its back – and all up for grabs 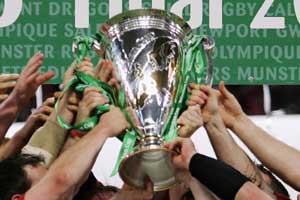 The public allocation of 50

Defending champions Munster, along with Llanelli Scarlets and Biarritz Olympique are the only teams left with four wins from four but nothing will be determined for even that trio until after Round 5 with most of the qualification spots and important rankings staying firmly in the melting pot until the following weekend.

And the new venue of Stade de Geneve, Switzerland, will become the 80th stadium to stage Heineken Cup matches as Bourgoin take their clash with Munster across the border.

“We have given over 2,000 tickets to French schoolchildren and over 1,000 to schoolchildren from Geneva to offer as many potential rugby fans as possible the chance to experience Heineken Cup rugby,” said Director of Rugby Pierre Raschi.

“We would hope for around 2,000 Munster supporters, who we are looking to support with transport from Lyon and Bourgoin, as we are for our own supporters who have made the decision to follow us to Switzerland.

“We are looking to promote rugby on both sides of the border. Munster are renowned for both their fantastic team and the amazing ambience brought by their supporters and a match like this would be a fantastic advert for rugby in Switzerland.”