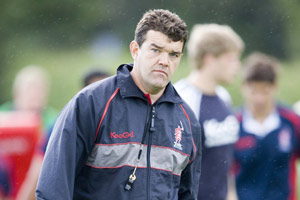 Newcastle Falcons hope to welcome a record European crowd to Kingston Park on Saturday for their European Challenge Cup quarter-final against Castres Olympique. - 08/04/2008 10:04

Biarritz are set to qualify for the quarter-finals as the number one seeds, according to Border Reivers coach Steve Bates…

..He believes last season’s losing finalists are on track for a perfect six out of six record in the group stages with enough bonus points to put them top of the pile and guarantee a home quarter-final against the second best runners-up.

Assuming Biarritz win with a bonus point at home to Overmach Parma, then Northampton need to gain a bonus point in beating the Borders and then do the same at home to Biarritz on the final weekend to stand a chance of topping the group.

“I think Biarritz will not just qualify from our group, I think they will do it as the number one seeds in the whole competition,” said Bates.

“I think they will win with a bonus point against Parma and it could be all over by the time they go to Northampton for the final game – especially if we can give Northampton a run for their money this weekend.

“If we can get our best side on the park, not including long term injuries, then we have a chance of doing that.

“Northampton are struggling a bit at the moment, under pressure in the league, but having said that when you look at the names on the team sheet they are pretty impressive.”

Having competed for long periods in Northampton and given the French champions a shock in Biarritz, Bates is hoping to be able to notch a second Heineken Cup win this weekend.

“The Heineken Cup been great for us. We’ll have to pack a lot of people up, it will be a tough week getting these guys back on the field, but that’s where we sit – if we lose our front line we haven’t got a lot of depth, but we’re looking forward to Northampton,” said Bates.

“We have a lot of inexperienced players and this year’s competition has been a great development for them.”