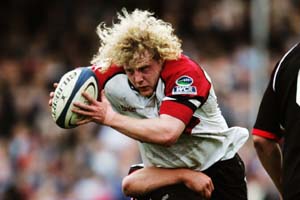 Ospreys prop Duncan Jones says the upcoming match against Gloucester is one his side must win if they have serious Heineken Cup ambitions - 13/11/2007 10:39

Prop Duncan Jones will captain Ospreys in their bid to become the first Welsh team to lift the Heineken Cup.

With 32 Heineken Cup caps to his credit, Jones will lead Welsh side Ospreys in the Heineken Cup in Pool 3 against Calvisano, Sale Sharks and Stade Francais.

Duncan believes the Ospreys, who have made no secret of their ambition to become the first Welsh team to lift the Heineken Cup and regain the Celtic League title they relinquished to Ulster last season, have assembled a squad of stars capable of taking on the best Europe can throw at it.

“The region has shown its ambition with strong signings and, with the boys returning from long-term injury, I am sure supporters will see a strong Ospreys side next season,” Jones said.

“It is an honour to be asked to captain the Ospreys, although I am fortunate to have already stood in during what was quite a difficult time last year following Barry’s injury.  We have a good mix of youth and experience and I will get a lot of help as we have decision makers throughout the side, ”

“We decided some time ago that Duncan was the man to lead us into what will be a big season for the Ospreys.  He led Wales with distinction in Argentina and has already proven to be a fine Ospreys Captain when he stepped up last season.  He leads by example both on and off the field, knows how to read a game, has sound judgement and has respect from throughout the squad”