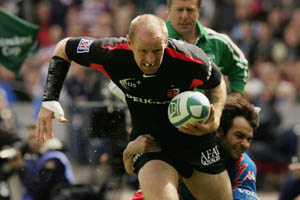 Former Toulouse man Gareth Thomas says his side's good season has given him quiet confidence ahead of next Sunday's Heineken Cup quarter-final. - 27/03/2008 12:20

Wales and Lions skipper Gareth Thomas says he is taking “nothing for granted” as he gets set to re-launch his playing career in August.

Wales’ record try scorer is just five Tests short from overtaking Gareth Llewellyn as the nation’s leading cap holder, but even after 88 games and 36 tries he believes he will have to prove his worth to new coach Gareth Jenkins.

After taking the first steps back to playing in a charity match at the weekend following four months on the sidelines, Thomas declared himself “100% fit and raring to go”.

Yet while the inspirational Toulouse utility back can’t wait for his first game in the French Championship on the weekend of 18-19 August, he doesn’t know if he will figure in Jenkins’ plans in the build-up to the 2007 World Cup.

“I desperately want to play for Wales again and I know there are players like Lee Byrne and Kevin Morgan blocking my way into the side,” admitted Thomas after playing 70 minutes for the Welsh Academicals in their 45-43 victory over the Celtic Crusaders in a fund-raising match Ty Hafan Children’s Hospice.

“I’ve had a quick chat with Gareth Jenkins and he knows where I’m at. I want to play rugby at a high enough standard to play for Wales again.

“I know I need to prove myself all over again. That’s why I feel so excited at the moment.” Thomas may have been playing a game in he described as “a 1% rugby match for a great cause”, but the smile on his face as he laced up his boots for the first time since Toulouse lost to Narbonne on 18 February will come as a huge boost to Jenkins and Welsh rugby.

There can be little doubt that a fully fit Thomas would be among the first names down on any Welsh team sheet and, fitness and form permitting, he is likely to be vying with Duncan Jones, Michael Owen and Stephen Jones for the Welsh captaincy.

“I am disappointed that people are portraying it as if people are having to battle to get the job of Welsh captain,” said Thomas.

“I love being captain of Wales and people know how I feel about that. I love the role, but I love rugby more.

“If I am first out of the tunnel or last, it doesn’t matter as long as I am in a Welsh jersey. I cannot expect Gareth Jenkins or any Welsh coach to automatically select me because of what I have done in the past – I have to prove myself again.

“I’ve had a good rest and I don’t think I’ve ever had as much hunger for the game since I was 16.

“If there is any year I need to be desperate and hungry to play the game then this is it.
The plan was to make the World Cup, which would have been a massive achievement, and call it a day.

“Now I want to make the World Cup and play on afterwards. I will keep going until I’m dropped.

“Rugby is such a massive part of my life. I don’t know what I would be without rugby and playing for Wales – I love doing it and it’s my passion to play for my country.

“The break that so many Welsh players have had this summer will be great in the build up to the World Cup next year. I know that if I hadn’t had this break I would have been on my last legs by this summer.

“Psychologically, the rest has been terrific for me.” Thomas’ last game for Wales was in the 28-18 win over Scotland at the Millennium Stadium on 12 February. Captain for the 12th time, he scored two tries that day.

He returned home from that game to prepare for the Six Nations match with Ireland the following weekend, but suffered what was feared to be a minor stroke after appearing on television.

Doctors discovered that an artery in his neck had closed up and the blood flow had been stemmed. Rest has helped to heal the problem, although Thomas admitted he had a scare last week.

“One of my friends’ kids jumped on my back for a piggy back ride and wrapped his arms around my neck. I had a bit of a wobbly and I had to ring up the doctor,” said Thomas.

“I had another scan and when the doctor rang me up to say he needed to speak to me, I thought he was going to say I couldn’t play again.

“But he told me the blood is flowing through the artery again and the scan was the best I’d ever had.”

Thomas also revealed that a post-match chat with England soccer legend Paul Gascoigne after the Soccer Relief charity game at Old Trafford last month made him realise exactly how much he wants to play again.

“When I played in the Soccer Relief game I spoke to Gazza about my injury and he told me that walking out into the middle of a big stadium for a big game was what he missed most in his life,” said Thomas.

“That hit home with me. I used to know when I was going to retire and, if anything, this injury and the break has made me review my plans because I’ve missed the game so much.

“I don’t know where I would be if I didn’t have rugby and I couldn’t play for Wales. I’m 31 now (32 next month), and no spring chicken, and I know I am coming to the end of my career.

“But there is so much more I want to give. I want to be able to walk away from rugby and people say he gave his all.

“I have had enough of watching rugby and I told Toulouse I couldn’t bear to go to Paris to see them in the French Championship final earlier this month. I can’t explain how frustrated I’ve been.

“I desperately want to play again and that was part of the reason I came today. Ty Hafan is a great cause, but I really wanted to get back out onto a rugby field.

“People ask me how I am out of kindness, but there is nothing wrong with me. I’ve forgotten about the injury because that helps the healing process.

“I’m 100 per cent fit and raring to go. I started a training plan six weeks ago and I’m now into the second part of it.

“I’m going back to Toulouse at the beginning of August and I’ll be ready for their first game on 18/19 August.”