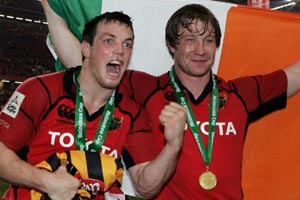 Two more clubs – Benetton Treviso and Rugby Calvisano – have booked their Heineken Cup 2006 / 2007 places by qualifying for the Super 10 final to be played at Stadio Brianteo, Monza, on Saturday, 27 May.

Benetton Treviso and Rugby Calvisano qualified for the Super 10 final to be played at Stadio Brianteo, Monza, on Saturday, 27 May.

The second Scottish place is still up for grabs between Border Reivers (currently ninth in the Celtic League) and 10th placed Glasgow Warriors while in France the seventh place will be filled by either Castres Olympique (currently seventh in the Top 14) and ASM Clermont Auvergne, who are in eighth spot.

Border Reivers are home to the Dragons and Glasgow travel to Connacht on Friday night in the Celtic League while Castres travel to Pau and ASM Clermont go to Bayonne in the final round of the Top 14 on Saturday afternoon.

The draw for the Pool positions for the 2006 / 2007 Heineken Cup will be made in June.
The 24 teams who have qualified for the tournament will be drawn into six Pools of four teams each.
The No 1 seeded teams from each of the six nations – England, Ireland, Italy, France, Scotland and Wales – will be drawn in separate Pools. In England, Italy and France this will be decided by the winner of each respective domestic championship. In the three Celtic countries top seed will be decided by performance in the Celtic League.

The 21 qualifiers so far (by country in alphabetical order) are:

The 24th and final position will be decided by a playoff between Newport Gwent Dragons, highest non-qualifying team from the Celtic nations, will play Overmach Parma, the best of the losing Italian semi-finalists.