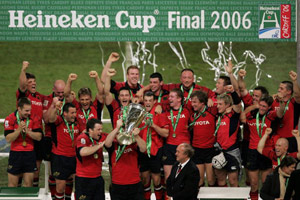 Munster were crowned European champions after winning the Heineken Cup for the first time after winning a gripping final against Biarritz in Cardiff.

Heartbreaking defeats in the finals of 2000 and 2002 had upped the stakes for Munster but it was a case of third time lucky after producing the performance of a lifetime.

A packed Millennium Stadium erupted in a sea of red after Trevor Halstead and Peter Stringer both scored tries to savour.

And Ronan O’Gara kicked a perfect five out five to clinch an historic win for the Irish giants and spark wild celebrations that were heard all the way back in Limerick and Cork.

Sereli Bobo had given Biarritz hope with a try after two minutes and Dimitri Yachvili kicked 14 points – including three second-half penalties – as the French champions roared back late on.

But after so many disappointments in the final – including the 2002 defeat at the same venue – Munster were not to be denied a thrilling victory.

They had to recover from the blow of conceding an early try to dominate the first-half of this tenth Heineken Cup Final. Biarritz had been criticised by some for failing to carry their thrilling form from the French Championship into the knock-out stages of the Heineken Cup.

The French champions had managed just one try in 160 minutes, from Sareli Bobo, against Sale Sharks and Bath in the quarter-final and semi-final respectively. But it took them little more than two minutes to find a way through Munster’s defence – and it was that man again, Bobo, who tip-toed inside the touchline to score.

Biarritz had Munster under pressure right from the kick off and when Philippe Bidabe shrugged off John Kelly on the narrow side, Fijian Bobo had enough room to squeeze over in the corner to stun the huge Munster contingent. O’Gara narrowed the gap with a seventh-minute penalty and then began the move that saw Halstead lift the roof off the Millennium Stadium by giving Munster the lead. Biarritz looked to have survived a red siege on their try line when they cleared their lines before Anthony Horgan raced onto O’Gara’s neat chip. Jerry Flannery and Paul O’Connell burst forward before the ball was worked out wide for Halstead to crash over from close range.

Yachvili levelled the scores with 22nd minute penalty after O’Gara had added the conversion but that could not stop the red machine, by now in fifth gear. The power of the Irish forwards saw Munster rumble their way once more to within ten yards of the Biarritz line but it was a moment of thrifty opportunism that got them over.

Ireland scrum-half Stringer saw opposite number Yachvili out of position and left Serge Betsen grasping air as he rounded the blindside of the scrum untouched to score. O’Gara’s conversion put Munster 17-10 ahead before the break and a second penalty gave them the perfect start to the second half. Yachvili kept a cool head to bang over two penalties of his in response, the second after Denis Leamy’s high tackle on Imanol Harinordoquy.

That kept this final on a knife-edge with just four points separating the sides and half an hour still to play. Biarritz lost two key players in centre Damien Traille and skipper Thomas Lievremont to injuries but a fourth penalty for Yachvili narrowed the gap to a single point ten minutes from time. But ice-cool O’Gara was calm under pressure in front of goal as Munster held out until the final whistle.