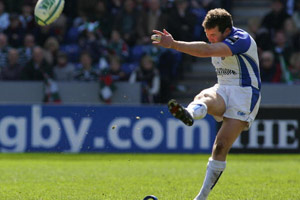 Ashton has named a team ladened with experienced internationals that he says will have the crudentials to earn a win at the Esadio Anoeta.

“I think in terms of playing away from home and in front of a partisan crowd – having done that not all that long ago at the Walkers Stadium and come through that experience in some of the most difficult circumstances – hopefully that will give the players a little bit of confidence and belief that they can go away and do it again.”

Aston is playing done the challenge of his opponants: “I’d like to think that we’re fairly adaptable in the way we think about the game so it doesn’t really faze us who we’re playing against or where we play the game. We can adapt on the hoof in the middle of the game, hopefully, and we will not be intimidated by playing away from home and outside our country.”

After the quarter-final victory, the manner of last Saturday’s victory over Bristol, or at least the way the first half went, has certainly instilled the players with further confidence: “A lot of it’s about the mental side of the game. It’s not about how good you are technically or how tactically well you play; it’s just the focus of the game from moment to moment, rather than trying to play 30 seconds ahead of yourself.

“Once you start getting distracted that’s when things against a good side start going wrong. If we do start making the sorts of mistakes we made in the first ten minutes of the second half against Bristol, they [Biarritz] have got guys that will punish us big time.”

At present, Biarritz are joint top of the French league with Stade Français, and although they lost last time out against Bourgoin, they had rested most of their first-choice players, and Ashton says that the previous week’s win against Toulouse is a better indicator of their strengths.

“They played a very up-tempo game, a very quick game, they’ve got dangerous runners all over the field, they were prepared to attack if the opportunity arose from anywhere on the field. They’ve got quite a formidable pack of forwards, they’ve got some real big kickers who can win a kicking contest more often than lose one.”

Serge Betsen, Imanol Harinordoquy and Dimitri Yachvili are just a few of the familiar names in a Biarritz squad littered with French internationals and Ashton is looking forward to seeing some of them in action, Yachvili in particular.

“Being an ex-scrum-half myself, I’m actually quite excited about watching him play in the flesh. I just think he’s a great rugby player. We know he can turn a game, we know he can win a game and we’ll obviously be keeping a fairly close watch on him.”

Most of all, Ashton says that Bath Rugby should be excited by the prospect of Saturday’s match.

“I think this is a phenomenal opportunity even for people like Danny Grewcock, who’s been on two Lions tours, got 60-odd caps for England, and played I don’t know how many times for Bath. These are the kind of occasions that he won’t have played in before. You’re playing right at the top of the club game in the northern hemisphere, in a football stadium in northern Spain. It’s a unique experience.”