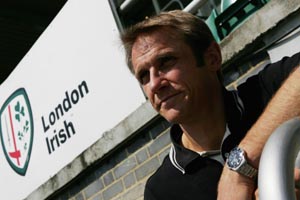 London Irish are ready to make history by reaching the quarter-finals of the Heineken Cup for the first time - and want to go one better by staying at home. - 23/06/2008 14:50

London Irish are a team in form with six wins from their last eight starts but director of rugby Brian Smith insists that home advantage in their European Challenge Cup semi-final at Kingston Park on Sunday must make Newcastle Falcons favourites.

The Exiles will travel to Newcastle on the back of 28-24 victory over Leeds Tykes that shot them into second spot in the Premiership with the all-England semi-finals ensuring an English club will walk off with the trophy next month.

“I agree we are having a pretty good run right now and we have built up some nice momentum going into the European Challenge Cup semi-final,” said Smith.

“We are now down to the business end of the competition and the English team have played pretty well to dominate the tournament.

“I certainly don’t mind playing another Premiership team in the semi-finals – although Newcastle are a quality team and we will be playing them in their own back yard.

“We do have a decent away record this season but surely Newcastle must be raging red-hot favourites on Sunday.

“We won the Powergen Cup back in 2003 but there has been a little while between drinks since then so it would be good to put that right in this tournament.

“You play rugby to represent your country or to win things and, if we are good enough to advance to the final and play either Gloucester or Worcester then it would be a great opportunity for us to win some silverware.”

London Irish and Newcastle have met twice in the Guinness Premiership this season – and both matches went down to the wire and ended up with just three points separating the sides. The Exiles won 23-20 in Newcastle and the Falcons 9-6 in Reading.

“We have to concentrate on doing a job in Newcastle, putting Sunday’s match to bed and getting to the final,” said Smith.

“It is going to be a good challenge and one we are already looking forward to meeting.

“It was a hard-fought match against Leeds but we were always well and truly in control and it was important to keep on winning and keep the momentum going for Sunday.

“We also learned some lessons from the match and we know there is still plenty of room for improvement.

“We have a few areas that we need to tidy up and we will work hard during the week in order to ensure we have a good performance in the semi-final.

“They have made massive improvements in their pack since we met them early on in the season and they will be very tough up front.

“And in Matthew Burke at full back they have a real game breaker – he is absolute quality – while Jonny Wilkinson coming back will also be a factor.

“They certainly out-kicked us in the match up there and they know how to use the local conditions so with home advantage they must be favourites.”