Too close to call – Jenkins 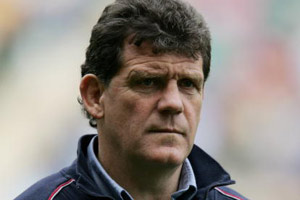 Gareth Jenkins, who has guided Llanelli Scarlets to the knock-out stages of the Heineken Cup seven times and is on the short list for the vacant position of Wales head coach, believes the Irish province which displays the greatest resolve will win the all-Ireland Heineken Cup semi-final at Lansdowne Road on Sunday.

“Munster versus Leinster is going to be the game of all games and I genuinely wish I could be there sharing the emotion of two fantastic teams and wonderful provinces,” he said.

“It’s very hard to pick a winner because both sides have such quality although they both belong to totally different rugby philosophies.

They’ve both done remarkably well in Europe this season – the way Munster totally demolished Sale and the way Leinster produced perhaps the game of the tournament against Toulouse were both incredible.

“Both sides are there on merit but I don’t think Sunday will actually be about their rugby styles – it will be far more tribal than that. It could be the semi-final of all semi-finals and come the day it will not be anything more than emotion, blood and thunder, passion and pride. The side with the biggest resolve will win this game.

“At the top end of any sport, when you get the big occasions, it’s the team that gets the big performances out of their star players that wins something. It’s going to be a classic from the outsider’s point of view, the emotion of the Munster pack against the class of Leinster’s three-quarter line.

“And with the likes of Paul O’Connell, David Wallace, Brian O’Driscoll and Gordon D’Arcy, it’s going to be memorable.”

Biarritz Olympique and Bath Rugby clash in the first semi-final at Estadio Anoeta in San Sebastian on Saturday and Jenkins is not ruling out an away win for the 1998 champions.

“San Sebastian is one of the most impressive venues I’ve ever seen,” he said. “The quarter-final against Sale was just something special, the whole occasion was a carnival of colour and emotion and it’s going to be very intimidating for Bath. You would initially say you fancy Biarritz for those reasons.

“However, Bath are a team that has evolved this season since Brian Ashton has been back there, they’ve got a different resolve and steeliness there and they are actually playing knock-out rugby pretty effectively.

“We’ve played them this year and they were able to play great rugby in a very competitive Powergen Cup semi-final and then play a forward type, close encounter against Leinster.

“And I think French rugby has peaked. Until this season they have, without a doubt, dominated Heineken Cup rugby. Yet for some reason, and don’t ask me why, there is a conservatism and negativity that is affecting French rugby in this tournament. Biarritz looked afraid to play in their last game (versus Sale) and we saw Toulouse taken apart by Leinster so I wouldn’t write off Bath’s chances – despite them being the underdogs.”