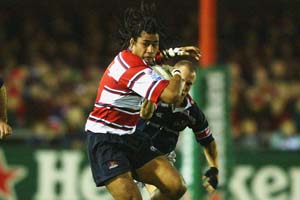 The two sides will go toe-to-toe for the second time in a week when they play a European Challenge Cup sem-final at the same  venue next Saturday.

But last weekend it was all about the Guiness Premiership and it was break-neck stuff as a capacity crowd at Kingsholm was the home team secure four crucial points.

Worcester, who attacked the set-piece throughout, made a physically draining start. Tony Windo was a pain in the rear-end at scrum-time, while Gloucester’s line-out creaked at times.


And it was the visitors who took the lead when Shane Drahm nailed a 30-metre penalty but Lamb hit back immediately to level the scores after 30 minutes and six minutes later he handed Gloucester a 6-3 lead with his second penalty.

The two stand-offs were then dispatched to the sinbin for a spot of punching – the bantam weight nature of the contest belied the feeling behind it – but Gloucester suddenly rose to the challenge.

Allen, the wonderfully tough and full-on Peter Richards, Andy Hazell, Simpson-Daniel and James Forrester were all heavily involved in some wonderful, free running rugby. They should have scored when Allen created a move and when possession was dragged to the right, Simpson-Daniel put Olly Morgan over but the pass was forward.

But two minutes before the break, Gloucester got the try they needed. Tindall and Morgan were initially involved before another critical Allen break and with Worcester stretched, Lamb found Peter Buxton and he drew the last defender for Simpson-Daniel to score.

The secret for Gloucester was to keep away from Worcester’s withering set-piece work but it was the visitors who dominated the third quarter.

Drahm nailed penalties after 55 and 60 minutes to drag them to 14-9 behind and with the pressure mounting on Gloucester, Andy Gomarsall made a telling break from the base of a five metre scrum and scored on an angled break.

Drahm’s conversion took Worcester 16-14 and all of a sudden, the hosts were staring at a fifth successive league defeat.

Lamb landed a 67th minute penalty to raise the roof and with a sell-out crowd at fever pitch, Gloucester scored twice in the last 10 minutes.

The first owed everything to Tindall’s power and a lovely pass under pressure from Ludovic Mercier – on for Morgan – who put Foster into space and he used his strength to score.

It took the sting out of Worcester and when Terry Sigley and Jack Forster mowed big holes into Worcester’s defence, Richards came again and Foster scored in the corner to seal a Gloucester victory.