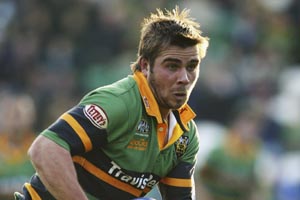 Northampton Saints scrum-half Johnny Howard has opted to remain at Franklin’s Gardens until the end of the 2007/08 season by signing a new two-year contract.


The 25-year-old, who joined Saints Academy from Aylesbury RFC, has developed his game alongside former All Black Mark Robinson and previously, England’s most capped scrum-half Matt Dawson.

Northhampton Saints face Worcester Warriors in the European Challenge Cup quarter-finals in Franklin Gardens on 1 April, with both sides aiming for their first European title.