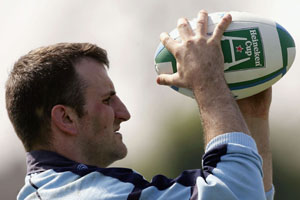 Chuter pleaded guilty to stamping on an opponent in the Powergen Cup semi-final against London Wasps at The Millennium Stadium, Cardiff on March 4.


The hooker pleaded guilty to treading on Wasps rival Raphael Ibanez at a Rugby Football Union disciplinary hearing in London on Tuesday.

His ban currently lasts until 2 May, which means he will miss the Heineken Cup quarter-final against Bath, which kicks off in Walkers Stadium at 12:30 on 1 April.

The 29 year old lined out for Leicester Tiger in all of their Heineken Cup games this season, and has a tally of 25 appearances in the Heineken Cup.