Saints Determined To March On 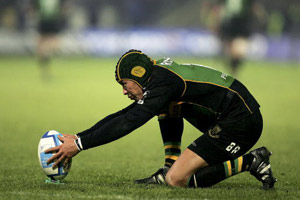 The all-English showdown comes with both clubs having won three from four and Bristol heading the group on 16 points with the Saints one point adrift.

Bristol won the Round 2 clash between the sides at The Memorial Stadium in October 36-28, but Saints’ Director of Rugby Budge Pountney says this is the one that matters.

“We are under no illusions that the game on Saturday is going to be tough,” said the former Scotland captain and flanker.

“We played Bristol a couple of weeks ago and managed to scrape home with a win.

“But they suffered an agonising defeat at Sale Sharks in the Premiership last weekend, scoring three tries and putting in a good performance but losing by two points.

“That seems to have been pretty harsh and I think they will still be smarting from this and definitely looking for a win. We are planning to use our home advantage as much as we can and try and ensure our qualification for the quarter-finals.

“And I know that Bristol are spending a few days in Lanzorote this week so I’m hoping that the shock once they get back to the Northampton climate will put them off their game!”

And while both clubs know plenty about each other, Pountney believes that only makes for a tougher match than going up against the unknown.

“It’s actually harder to play teams we know than the teams we don’t know,” he said. “It’s tough to play a team in a cup competition that you have recently played in the league and Bristol are a tough side so they’re sure to make life difficult for us.

“We enjoy playing European rugby and are looking to achieve as much as we can in this year’s tournament.

“We have got a few injuries, particularly in the backline and, with Rhodri Davies and Dave Quinlan now out, we are really struggling for centres and that is going to make things difficult for us.

“That said, our forwards are okay injury-wise and looking pretty good at the moment.”