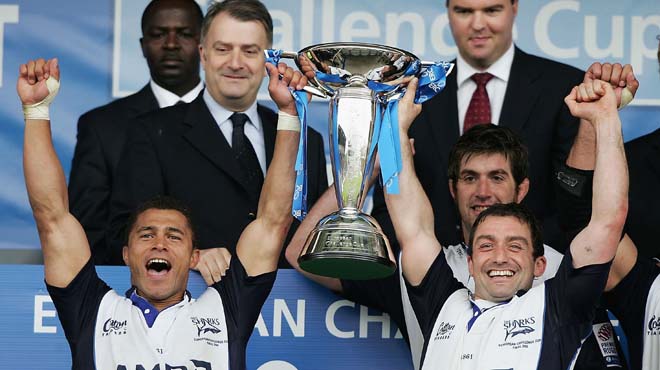 Having scored 10 points in his club's success over Pontypridd at the Kassam Stadium three years earlier, the England fly half was in even hotter form as he picked up the Man of the Match award after scoring two fine tries at the same venue.

Hodgson was one of five Lions selected in the Sale starting line-up and another two members of that famous five, Andy Titterrell and Mark Cueto, also got among the tries.
Pau, the champions in 2000, were unable to stem Sale's flow despite the torrential rain. By half time, the English club were well on their way to a second title with a 17-3 lead. The first 10 points came from Hodgson with a third minute penaly and a 24th minute try and conversion. Pau's only points came from the boot of fly half, Lionel Beauxis.
But no sooner had Pau notched their first points than Sale hit back with their second try through some brilliant support play wide out on the right by Titterrell.
Playing in the back row on this occasion, Titterrell was in the right place at the right time to take an inside pass from Cueto to cross near the corner for a try which Hodgson converted.
Cueto himself was next over the Pau line 16 minutes after the break and Hodgson made victory secure with his second try on the hour.