After each Heineken Champions Cup weekend, fans can vote for Try of the Round among five tries shortlisted by our experts. You will enter a draw for a chance to win a top rugby prize. Terms & Conditions

Cheslin Kolbe wins first Champions Try of the Round award

Cheslin Kolbe’s spectacular first try for Toulouse against Ulster Rugby has scooped the first Try of the Round award in this season’s Heineken Champions Cup.

The South African’s score landed hundreds of votes and was chosen ahead of excellent tries from Donavan Taofifenua (Racing 92) and Ian Madigan (Ulster Rugby).

Kolbe’s try was also the pick of beIN SPORTS pundit Rodolphe Pires, who said: “For me, Cheslin Kolbe’s try against Ulster Rugby is a clear winner from Round 1. Not just for its individual brilliance, but also because the opportunity was created by teamwork.

“Toulouse are quick to exploit a turnover with intelligent link play by Sofiane Guitoune and Thomas Ramos and then, the focus is on Kolbe’s outstanding ability to produce a score out of virtually nothing.

“With his speed and footwork, we all witnessed what was a superb try last Friday evening by unquestionably the world’s best wing.” 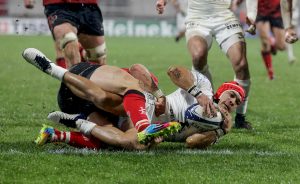