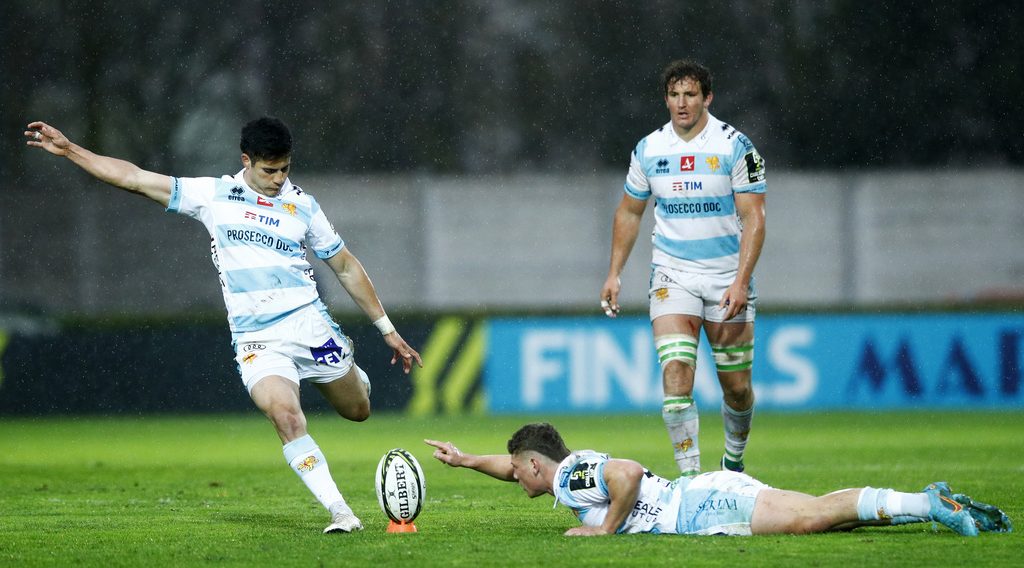 We’ve taken a look at the best of Saturday’s domestic action involving EPCR Challenge Cup clubs, with Benetton Rugby picking up a second win of the season in style.

Benetton too good for Scarlets

Albornoz notched the first try of the game for Benetton, whose other URC victory also came against EPCR Challenge Cup opposition in Glasgow Warriors, before Edoardo Padovani and Tommaso Menoncello crossed after the break.

Albornoz’s conversion and four penalties were decisive for the hosts, with Scarlets’ Sione Kalamafoni and Johnny Williams crossing in the final 20 minutes as the Welsh region rallied.

Leigh Halfpenny kicked three penalties for the visitors on his return from injury.

Elsewhere in the URC, it was heartbreak for EPCR Challenge Cup outfit Dragons as they went down 20-19 to Cell C Sharks at Rodney Parade.

Four Will Reed penalties and a converted Elliot Dee try looked to have been enough for the home side, but their Heineken Champions Cup counterparts dotted down to deal a sucker punch with five minutes to play.

If the team you support was a band which one would they be? 🎙#InternationalMusicDay #ChallengeCupRugby pic.twitter.com/vgIYRYXhJI

Meanwhile, in the Gallagher Premiership, Bath Rugby, who return to the EPCR Challenge Cup this season, went over for six tries at London Irish but fell to a 47-38 defeat.

The visitors trailed by 30 points at the break, with Gabriel Hamer-Webb’s try providing their only points. However, they almost completed a remarkable turnaround as Matt Gallagher, Joe Cokanasiga and debutant Niall Annett (2) all crossed.

Irish ultimately held on for victory, though, with Bath rewarded for their efforts with a third losing bonus point in four games.

In the TOP 14, four-time Challenge Cup finalists RC Toulon eased to a 34-17 victory at Section Paloise, aided by 14 points from the boot of Benoît Paillaugue.

Toulon did the vast majority of the damage to their fellow EPCR Challenge Cup side in the first period, with Brian Alainu’uese, Anthony Etrillard, Beka Gigashvili and Jiuta Wainiqolo all dotting down.

Paillaugue’s second penalty of the game contributed Toulon’s only points of the second half, but it was enough for the away team as Pau could only muster scores through Clément Laporte and Youri Delhommel.