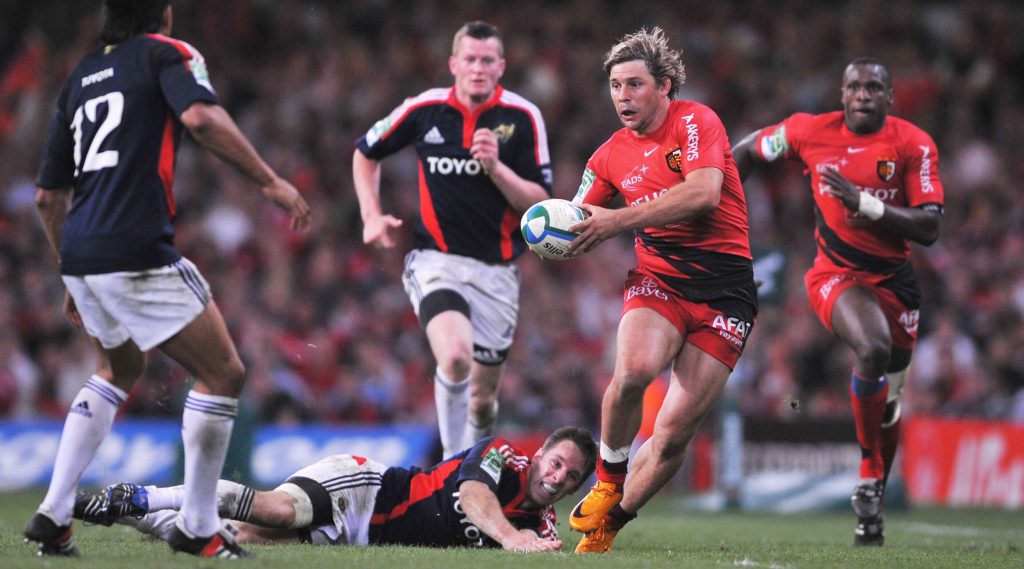 Cédric Heymans in action for Toulouse in 2008 Heineken Cup final

Diego Dominguez holds the record for the largest points haul in a final, kicking nine penalties and a drop-goal as he tallied all of Stade Français Paris’ points in their 34-30 defeat to Leicester Tigers in 2001. Johnny Sexton (28) and Owen Farrell (21) have achieved the next-best efforts, in 2011 and 2016 respectively.

No player has ever eclipsed Diego Dominguez’s nine penalties against Leicester in 2001 – Johnny Sexton slotted six for Leinster in last season’s final.

Joe Simmonds leads the way when it comes to conversions, adding the extras to all four of Exeter Chiefs’ tries in a 31-27 win over Racing 92 in 2020.

David Skrela remains the only player to convert two drop-goals in a final, with his efforts helping Stade Toulousain to a 21-19 victory over Biarritz Olympique in 2010.

Leinster’s Johnny Sexton has the highest total points in finals, with his haul of 18 in last season’s defeat to Stade Rochelais taking his tally to 86 over six showpiece games. He has scored two tries and kicked eight conversions, 19 penalties and one drop-goal.

It’s time to pick your flanker!

No player has managed to grab a hat-trick of tries in a European Cup final, but four players have gone over twice. Sébastien Carrat achieved the feat for CA Brive in 1998, before Bath Rugby’s Leon Lloyd in 2001, Leinster’s Johnny Sexton in 2011 and Racing 92’s Simon Zebo in 20220.

Six players have lifted EPCR’s elite prize on four occasions, with Cédric Heymans winning his first with Brive in 1997 before securing three with Toulouse (2003, 2005 and 2010). Frédéric Michalak was part of the same triumphant Toulouse team in 2003 and 2005 and went on to get his fourth and fifth stars with RC Toulon in 2013 and 2015.

Isa Nacewa, Devin Toner, Cian Healy and Johnny Sexton were all part of the Leinster sides crowned champions in 2009, 2011, 2012 and 2018, with the latter two players missing out on a record fifth last season.

Nick Abendanon is the only player to have scored a try in two different finals, dotting down for ASM Clermont Auvergne against Toulon in 2015 before crossing for the TOP 14 team again against Saracens in 2017, though he was on the losing side on both occasions.

Sébastien Bruno is the oldest player to appear in a final, with the hooker starting in Toulon’s 16-15 triumph over Clermont in 2015 at 38 years, eight months, and 23 days old.

Youngest player to be involved in a final matchday squad is another record held by Cédric Heymans – the utility back was 18 years, six months and five days old when he was named among the Brive replacements in 1997.