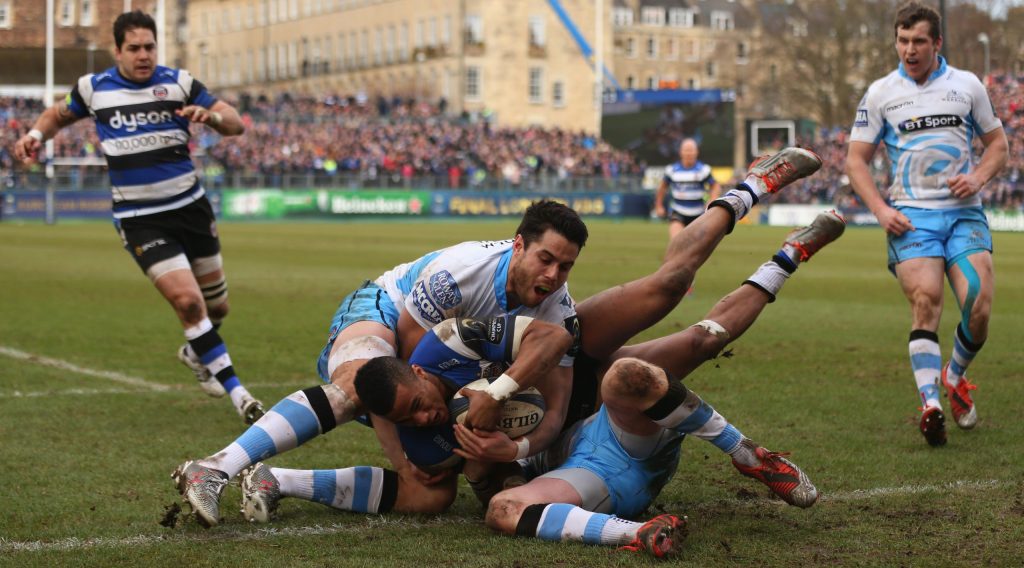 Bath's Anthony Watson is denied a try against Glasgow in 2015

Ahead of the 2022/23 EPCR Challenge Cup, we’re looking back at the previous European meetings between the sides drawn to face each other. Next, we review the host of clashes between Pool A contenders Bath Rugby and Glasgow Warriors, which have all come in the European Cup.

Bath had to work hard for a win against Glasgow in 2005-06, edging a tight second half after the scores were level at 23-23 at half-time.

Although they had been struggling to score tries domestically, Frikkie Welsh, Michael Stephenson, Michael Lipman and Salesi Finau all crossed for the hosts.

Dan Parks was key to Glasgow’s resistance, kicking well and adding a try, with Andy Henderson also crossing the whitewash.

Danny Grewcock was the star of the show as Bath underlined their trophy credentials at Firhill Arena, securing a fourth successive win in Pool 5.

The lock scored a solo try just after half-time to underline his man of the match performance, with Tom Cheeseman, Nick Walshe and Martin Stephenson also going over.

Glasgow had opened the scoring with a Dan Parks penalty, but they only managed a sole try from Kevin Tckachuk.

It was a festival of scoring three years later, and it was Bath again who managed to hold out for a vital bonus-point win.

That was despite a first half littered with errors, leaving the visitors 14-11 up at the interval thanks to two Thom Evans tries.

The second half was tense, as Michael Stephenson (2) and Shane Berne put Bath ahead, with Evans’s third of the match reducing the deficit.

Tries from Hefin O’Hare and Ruaridh Jackson closed then gap even further for Glasgow, but the hosts hung on.

Bath’s Matt Banahan scored once in each half at Firhill Arena to help his side complete the double over Glasgow.

The hosts had gone into the break with the lead after a Colin Gregor try and some accurate kicking from Dan Parks, but Shaun Berne and Joe Maddock added scores either side of Banahan’s second to wrap up the win.

It looked like Bath’s debutant Stephen Donald had sealed another win for the Gallagher Premiership side with a few minutes left as he kicked a penalty to take the visitors two points ahead.

But Duncan Weir had his eye on the win, going for a drop-goal which was charged down, and Gray was alert to the bounce, picking up the loose ball and splashing over the whitewash.

Bath avenged their defeat from two months prior in the final pool match, leading at the break after a Tom Biggs try and five points from the boot of Olly Barkley, Duncan Weir slotting two penalties for Glasgow.

Although Bath were quicker out of the blocks in the second half, Ben Skirving’s converted try extending their lead, Glasgow gave glimpses of being able to turn it round, with tries from Tommy Seymour and Rob Harley.

However, two late penalties from Olly Barkley secured the hosts’ victory, though both sides would fail to reach the knockout stage.

Do you know what the best way to mark #WorldwideWebDay is?

That’s right! Heading over to our site to bag your #ChallengeCupRugby tickets 🎫

Bath came into the 2014-15 contest as favourites, but it was Glasgow who delighted their home fans with an impressive five-try victory.

Three of those tries came in the first half, and the visitors’ only response was to capitalise on errors, with Jonathan Joseph grabbing their only try of the match after a fumble from Stuart Hogg.

Mark Bennett got two of the Glasgow’s scores, with Sean Maitland, Tommy Seymour and Niko Matawalu also going over while the kicking boot of Duncan Weir proved reliable throughout.

Bath might have started the pool stages in poor form, but they got the job done at The Recreation Ground to write their name in European Cup history.

With two penalty tries, they became the first club to qualify for the quarter-finals as group winners after losing their opening two group matches.

Glasgow crossed through Alex Dunbar and Richie Vernon but couldn’t stop Bath reaching the last eight for the first time in six years and only the fourth occasion since they won the tournament in 1998.