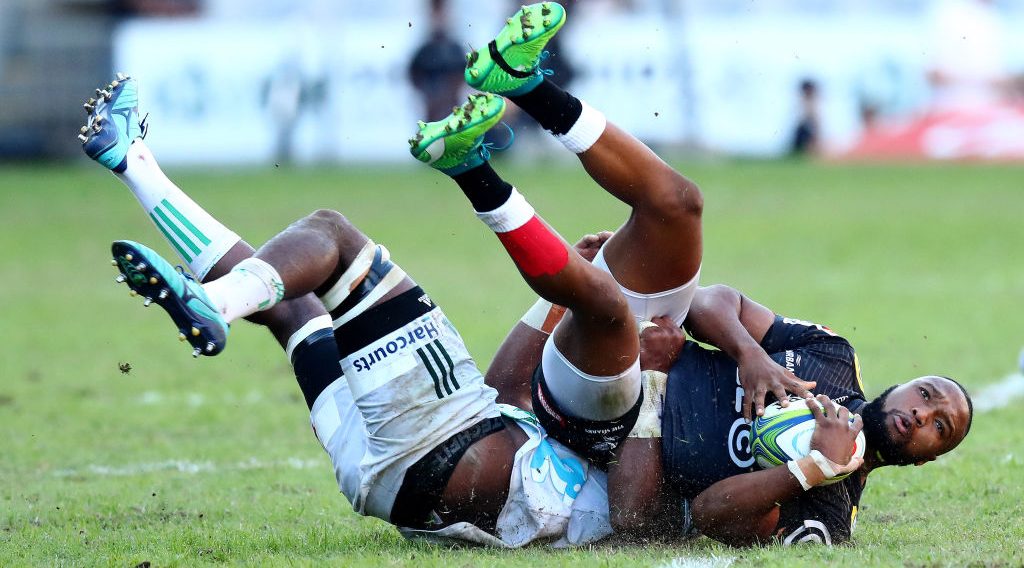 Sharks centre Lukhanyo Am is tackled

With next season’s Heineken Champions Cup including three South African clubs for the first time, we’re taking a closer look at each club’s squad, section by section, and picking out players capable of making a difference. Today, we look at the main men among the Sharks backs, who take on Harlequins and Union Bordeaux-Bègles

Bosch, 25, has represented South Africa on two occasions and has tallied 605 points in 78 senior appearances for Sharks.

Fourth in points scoring during the United Rugby Championship (URC) in 2021-22 with 138 points – including two tries – Bosch tallied 519 metres gained and seven clean breaks during the campaign.

Mapimpi, 32, was Sharks’ leading back when it came to tries scored in 2021-22 with six, just one behind hooker Bongi Mbonambi. The South African has represented his country on 27 occasions scoring 95 points.

The wing registered 15 clean breaks during last season’s URC – fifth most in the league – and gained 707 metres on 105 carries.

Fellow wing Fassi, 24, contributed a trio of tries during the last domestic campaign and ranked ninth in metres gained (751). He was a threat across the board ranking in the top 50 players for clean breaks (13), offloads (12) and carries (105).

Fassi recently made his international debut and has tallied three appearances and two tries for his country.

Sharks’ captain Am, 28, has 29 international caps to his name, and was a key figure in South Africa’s 2019 World Cup triumph.

The centre was in imperious form in the URC in 2021-22 notching four tries, 12 offloads and 6 clean breaks in just eight games.

Defensively, he recorded 40 successful tackles and turned the ball over five times.

Chamberlain, 23, will be eager to make himself a regular on the team sheet this season having made seven starts in 2021-22.

In 14 games played, Chamberlain notched an impressive 69 points – good for the 18th most in the competition. Expect big things if he can cement himself in the XV.