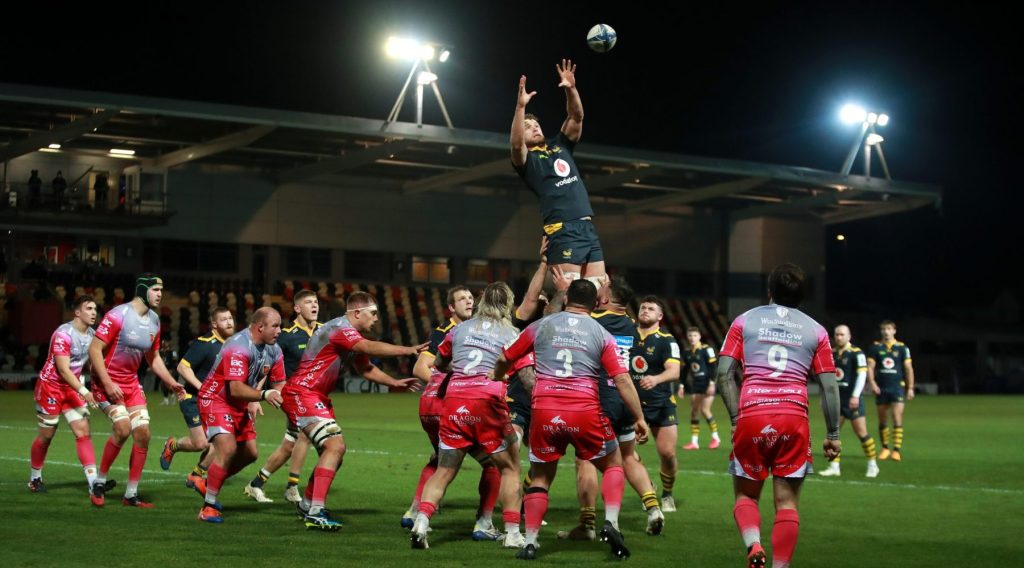 Ahead of the 2022/23 EPCR Challenge Cup, we’re looking back at the previous European meetings between the sides drawn to face each other. Today, we review the five European contests between Dragons and Wasps, who will square-off once again in EPCR Challenge Cup Pool B.

A sublime second half comeback from the English side – having trailed 10-0 – saw Wasps defeat Dragons in the pool stage of the 2010-11 Heineken Cup.

Ashley Smith dotted down to give the Welsh region an early lead, with Jason Tovey adding the extras and a penalty to open up a double-digit lead.

Wasps responded through a disputed try by Ben Jacobs – Dave Walder adding a conversion and two penalties – but a penalty and a drop goal from Tovey gave Dragons a 16-13 half time lead.

Points were at a premium in the second period, with tries from David Lemi and Tom Varndell adding ten further points for the victorious visitors.

In the return pool game of the 2010-11 season, Wasps ran out comprehensive winners over their Welsh opposition in a four-try performance.

3-3 at the interval, the English outfit turned the screw in the second half as Joe Ward, Mark van Gisbergen, Tom Varndell and Nic Berry all dotted down in a scintillating display.

Fly-half Dave Walder added 17 points from the tee, 14 of those in the second half. Aled Brew notched a late consolation for the Welsh region.

The two teams collided once again in the Challenge Cup in 2012-13, Wasps hosting Dragons at Adams Park in the first of two matchups.

Wasps continued their dominance of the fixture thanks to tries from Jack Wallace, Fabio Staibano, Billy Vunipola and Joe Simpson.

Dragons had opened the scoring with a second minute try from Andrew Hughes, but they failed to keep pace with their English rivals – Owen Evans and Jack Dixon with consolation tries.

The two sides played out a 39-point thriller in the second Challenge Cup meeting, with Dragons opening the try-scoring at Rodney Parade through Daniel Evans – the hosts’ only try of the contest.

A penalty try for Wasps, and a solo dot down from Nick Robinson – five of his 15 points in the dramatic contest – put the visiting English side up by four points.

A 75th minute penalty from the boot Steffan Jones with six minutes remaining ensured a tense climax to the contest, but Wasps held on to victory by the skin of their teeth.

The opening game of the Heineken Champions Cup for both sides in 2020-21, Dragons and Wasps renewed rivalries at Rodney Parade.

Tom Cruse opened the scoring for Wasps on 19 minutes, Dan Robson adding a second 10 minutes later as the English side led 12-3 at the interval.

Jonah Holmes notched for the Welsh region early in the second period to reduce the deficit to four, but two tries in four minutes from Jack Willis and Thomas Young put the game beyond doubt.