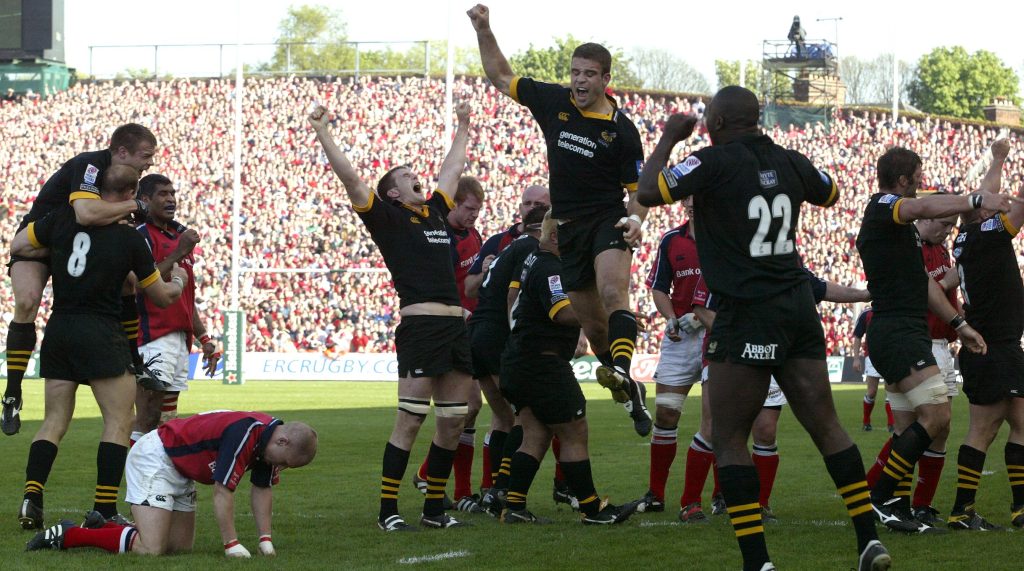 With Dublin’s Aviva Stadium set to host the Heineken Champions Cup and EPCR Challenge Cup finals in 2023, we’re looking back at some of the greatest European games Ireland’s capital has hosted, continuing with a thrilling semi-final from the 2003/04 Heineken Cup.

It was a memorable day for Wasps fans as their side beat Munster Rugby to reach the Heineken Cup final before going on to win the competition for the first time when they triumphed over Stade Toulousain 27-20 at Twickenham.

Taking place at Lansdowne Road, the 48,000 spectators inside the Dublin stadium witnessed one of the most exciting fixtures in the competition’s history as Wasps produced a late turnaround to dash Munster’s final hopes.

Ronan O’Gara, who guided Stade Rochelais to the 2021/22 Heineken Champions Cup, gave Munster the lead after slotting his first of three penalties for the Irish province, but Wasps soon hit back when wing Josh Lewsey cut inside and powered over, with his try then being converted by Alex King.

Wasps got their second try of the game just before half-time when Rob Howley successfully charged down Jason Holland, who had replaced an injured O’Gara, taking possession for the visitors before finding Paul Volley as the flanker dived over to extend his side’s lead.

However, Holland would ensure Wasps only held a two-point advantage at the interval when he kicked his second three-pointer minutes after Volley’s score, as Munster trailed 15-17.

Into the second half, and Wasps had Howley to thank again as the scrum-half made a break from deep before picking out Mark van Gisbergen, who found space on the touchline and dotted down with ease.

Another Holland penalty trimmed Wasps’ lead down to four, before the hosts then retook the lead when Stephen Keogh finished off a move he kickstarted with a storming run, with his try being converted by Holland.

Munster then seemed to be in the driving seat as they grabbed another try through Donncha O’Callaghan as Holland converted again to hand the Irish province a 10-point advantage.

King replied for Wasps with a penalty to make it a seven-point game and the fly-half later levelled the scores when he converted Tom Voyce’s try after he sped past the Munster defensive line to dive over.

Voyce would then power down the left wing again as Wasps got within two metres of the line, before working further left to release Trevor Leota who just managed to get the ball down in the corner to secure his side’s final status and put an end to a Heineken Cup classic.