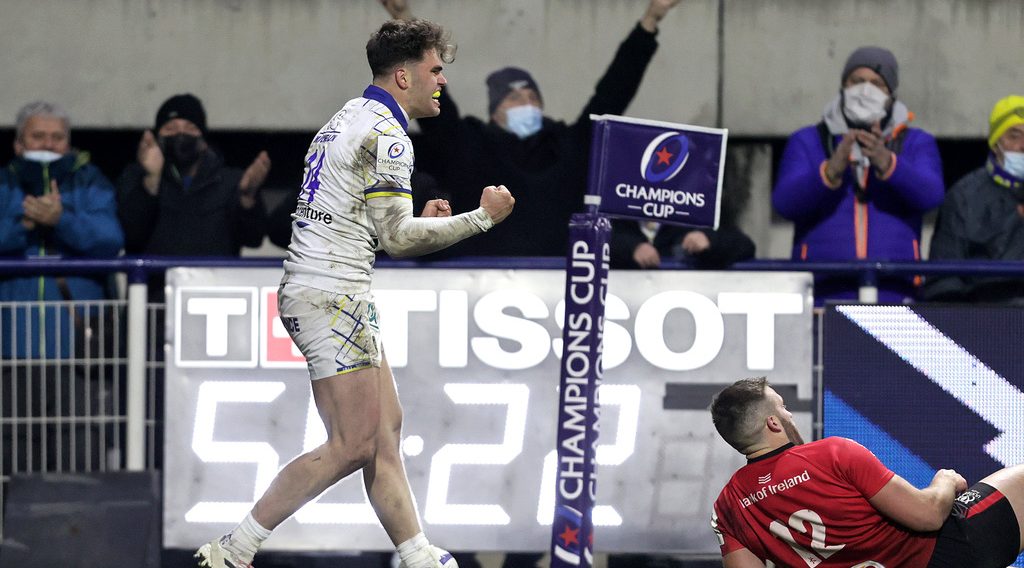 Clermont wing Damian Penaud celebrates scoring against Ulster in Round 1

As the Heineken Champions Cup Round of 16 approaches, we detail each side’s path to the knockout stage, selecting key moments, players and stats.

Wing Damian Penaud scored two brilliant tries for Clermont in Round 1, but the TOP 14 side were beaten 29-23 by Ulster Rugby at Stade Marcel-Michelin.

They would notch their first and only victory of the pool stage against Sale Sharks, with three first-half tries helping them to a 25-19 home success.

And although they were defeated 34-31 at Ulster in Round 4 despite a late flurry of tries, Clermont would progress to the knockout stage after finishing eighth in Pool A.

The Round 3 victory over Sale proved crucial in Clermont’s qualification for the Round of 16, and the introduction of veteran Morgan Parra from the bench proved to be the defining moment in the game.

The scrum-half calmly slotted two penalties either side of the 70 minute mark to edge his side into a slender lead they would ultimately cling onto.

Is the @ASMOfficiel winger the best in Europe right now? pic.twitter.com/Qr2GvCPKnD

Winger Penaud has been in tremendous form for Clermont, scoring three tries in three games, including his sensational brace against Ulster in Round 1.

The French international started twice and came off the bench in Round 4, with his lightening pace helping swing the momentum in his team’s favour, though they fell just short of a miracle fightback.

Clermont go up against Leicester Tigers over two legs, welcoming the Gallagher Premiership side to Stade Marcel-Michelin on April 10 before travelling to Mattioli Woods Welford Road on April 16.

Leicester advanced to the knockout stage after finishing top of Pool B.