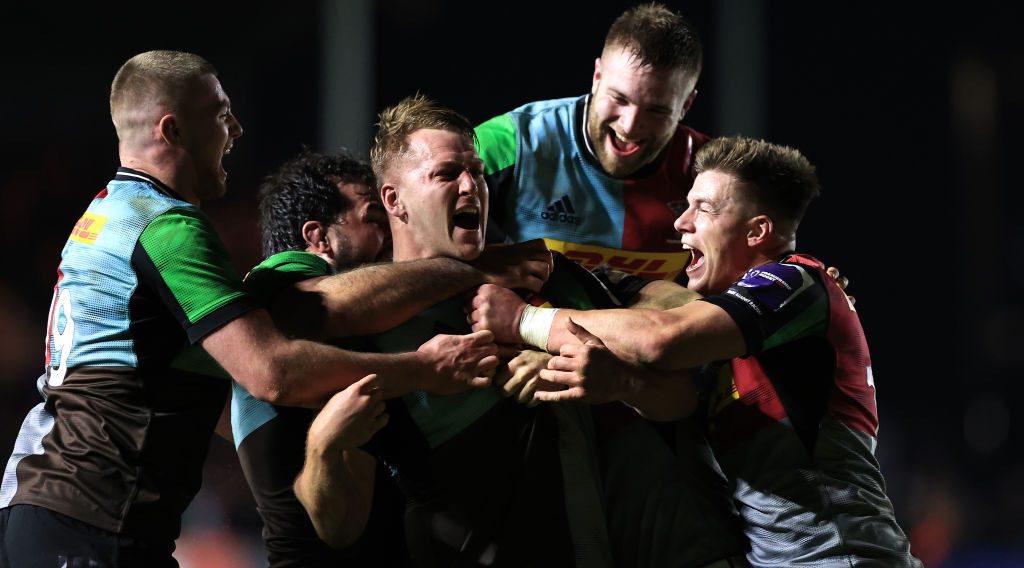 As the Heineken Champions Cup Round of 16 edges ever closer, we are set to detail each side’s path to the knockout stage, selecting key moments, players and stats.

Quins earned a place in the Round of 16 after recording four wins from four in Pool B, finishing second behind Leicester Tigers.

The Gallagher Premiership survived a late onslaught to win 20-18 at Castres Olympique in Round 1 thanks to tries from Louis Lynagh and Alex Dombrandt, the latter of whom notched a brace in a 43-17 home success against Cardiff Rugby the following week.

Quins looked set to fall to a first defeat in the pool stage in the reverse fixture against Cardiff in Round 3, but Marcus Smith put up 10 points in the final five minutes at Cardiff Arms Park to steal a dramatic 36-33 victory.

They would then triumph by the same score line at home to Castres in Round 4 following more late drama, the prolific Dombrandt the hero on that occasion as he crashed over to complete his hat-trick and win the game in the dying moments.

Quins have become proficient in producing match-winning moments in recent times, and there were several throughout the pool stage, but their late turnaround at Cardiff was arguably the most important.

Smith’s try, conversion and nerveless penalty a frenetic final five minutes ultimately secured their place in the Round of 16.

When it is considered that Quins had to welcome tough opposition in Castres in Round 4, booking their spot in the knockout stage early eased the pressure on that fixture somewhat.

No.8 Dombrandt was in electrifying form throughout the pool stage, crossing the whitewash six times, but it’s hard to look past the talismanic Smith as Quins’ leading figure.

The fly-half, who is nominated for the EPCR European Player of the Year award, asserted himself as this season’s Heineken Champions Cup points-scorer heading into the knockout stage, racking up two tries, 12 conversions and four penalties as he proved to be the difference on several occasions.

The biggest hits from the #HeinekenChampionsCup pool stages to get you through hump day 💪 pic.twitter.com/3oIajTEy2R

Quins take on last season’s Challenge Cup winners Montpellier Hérault Rugby, who progressed from Pool A after a crucial victory over Exeter Chiefs in Round 4.

Quins travel to GGL Stadium in the first leg on April 10 before welcoming the TOP 14 side to Twickenham Stoop on April 16.