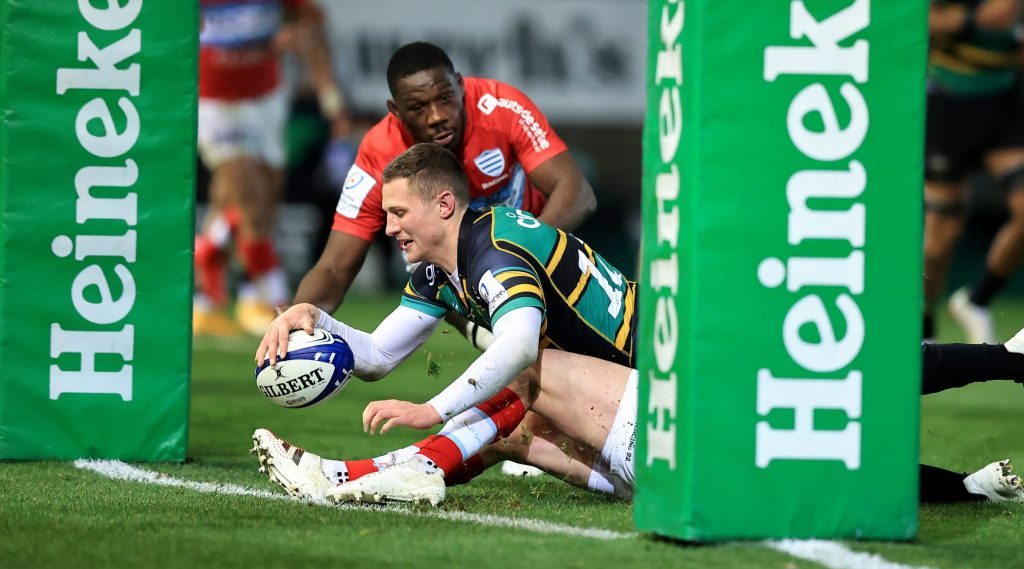 Fraser Dingwall scores for Northampton against Racing 92 in Round 1

Northampton Saints centre Fraser Dingwall says his side are grateful to have an immediate chance to bounce back from their Heineken Champions Cup opening round defeat to Racing 92.

The 22-year-old crossed for a second-half try but Saints were overpowered by the TOP 14 outfit last Friday, losing 45-14 at cinch Stadium at Franklin’s Gardens.

The Gallagher Premiership side take on Ulster Rugby in Round 2 at Kingspan Stadium tonight at 20:00 (UK & Irish time) and Dingwall hopes his team can put in an improved display against a side who picked up an excellent 29-23 win at ASM Clermont Auvergne last weekend.

“The short turnaround helps, to be honest, because it means you’re straight back into it and there’s a new challenge immediately,” he told Northampton’s website.

“I think it’s another exciting opportunity – they’re a very strong team, they’ve just beat Clermont away. Hopefully, we can go down there and put in a good performance.

Friday night team news is out 🚨

“It is, infamously, a tough place to go and get a win, so for them to do that, they’ve obviously done something right. Hopefully, we can go and challenge them in different ways and, as I said, pick up a result.

“I know that their game is largely based around the kick battle and physicality, especially up front in the set-piece. Those are areas we’ll definitely have to focus on and take on, and then we’ll hopefully we’ll bring our touch to it as well.

“We’re not expected to win and they’re really confident after beating Clermont. I think we know we’ve just got to go and give it a really good shot and, if we perform, we can beat anyone we play.”

Northampton faced Ulster in the quarter-finals of last season’s Challenge Cup, falling to a 35-27 home defeat after conceding two tries in the last 20 minutes – a game Dingwall looks back on with some regret.

“Last season’s match was a frustrating one for us because we felt like we had the upper hand, especially in the first half,” he recalled.

“In the second half, they managed to get some gains, in terms of the kick battle, and they got on top. Maybe we’ve got a point to prove from that.”