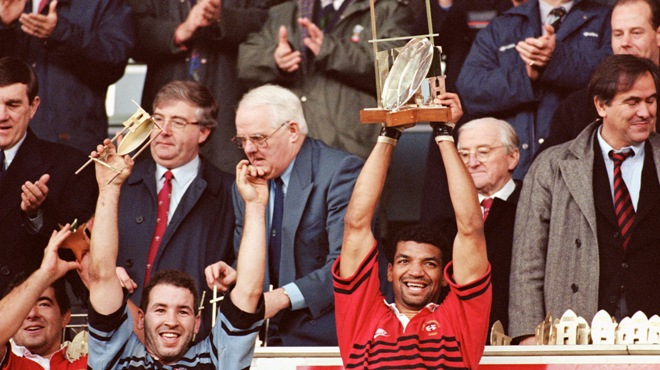 Over the last few weeks we have been asking you to choose which of the eight greatest teams to grace the European Cup is the best of all in our Fantasy Match-up series – and now the remaining two face off in the final vote.

Stade Toulousain overcame the Saracens side of 2016-19 in the quarter-final, before defeating 2020 Heineken Champions Cup winners Exeter Chiefs in the semi-final by 25 votes.

To place your vote in the final and to be in with the chance of claiming some brilliant European Rugby merchandise, click HERE.

Below we take a look at the French club’s inaugural Heineken Cup campaign in our road to glory series.

Stade Toulousain opened their 1996 Heineken Cup campaign with a 44-point victory over Farul Constanţa in Romania.

Émile Ntamack – father of Romain Ntamack who won the Heineken Champions Cup with Toulouse earlier this year – scored a brace of tries, as did David Berty, with the French side notching eight in total.

Although both sides had recorded comprehensive victories over Farul Constanţa – the Italian side defeating the Romanian side 86-8 a week after Stade Toulousain had defeated them 54-10 – points were at a premium during this clash at Les Sept Deniers.

Stade Toulousain outmuscled and overpowered Swansea in their semi-final, with Hervé Manent and Éric Artiguste scoring tries late in the game to put the result beyond doubt.

A first-half penalty try had given the French outfit a lead in the opening exchanges and outside centre Christophe Deylaud enjoyed a successful day with the boot, kicking three conversions and three penalties.

Swansea fly-half Aled Williams kicked the only points of the game for the Welsh region as Toulouse advanced to the final.

Stade Toulousain won a nail-biting final at Cardiff Arms Park, edging out the host club in a contest that went to extra time.

A blistering start from the French side saw fly-half Thomas Castaignède and scrum-half Jérôme Cazalbou cross the whitewash in the opening 10 minutes to put Toulouse in command.

However, Adrian Davies kept the Welsh region in touch by kicking five penalties – his final kick coming in added time at the end of the 80 to level proceedings and take the game into extra time.

Christophe Deylaud and Davies exchanged penalties in the additional period, before the Frenchman slotted home the game-winning penalty in the final seconds.