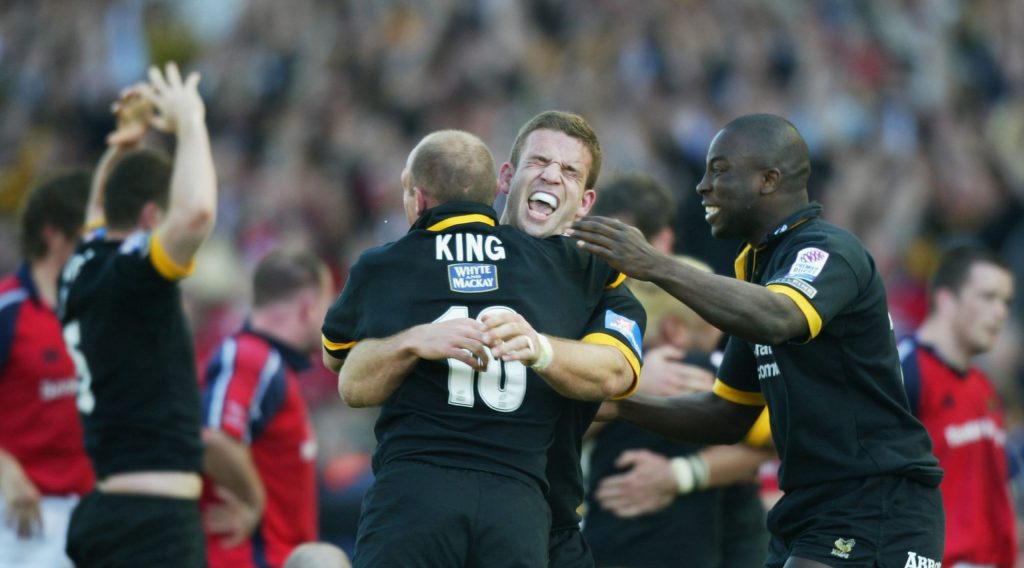 The 2004 epic between Munster Rugby and Wasps

With Munster Rugby and Wasps set to clash in the 2021/22 Heineken Champions Cup pool stage, we have looked back at the English side’s 2004 European Cup semi-final success (37-32) over the Irish province, speaking to Wasps captain Lawrence Dallaglio.

“To go away in a Heineken Cup semi-final is a tough ask,” said the 48-year-old. “To go away to Ireland to play in their national stadium against a provincial side like Munster was incredible, and as I said, goes down as one of those great historical games,” said Dallaglio.

“The significance of it wasn’t lost on myself and the squad – particularly with Warren Gatland having coached Ireland and having felt that he’d perhaps left Ireland under somewhat of a slightly controversial cloud.

“So there was a lot resting on it personally, there was a great respect for Munster, they were a side that was coming of their age in terms of the Champions Cup and had suffered in glorious defeats at the hands of other opponents.”

“It was an extraordinary build-up to the game – we had about 200 travelling fans and I think they had about 55,000, all wearing red shirts. I’ve never in my life to this day walked out into a stadium where the atmosphere has been as red-hot as that day.

“Apart from the fact the weather was blistering anyway, literally I walked out with the team and there was 55,000 red shirts quite simply. It was us against the entirely Munster nation really, and we were significantly pumped up.

“It was a classic game and it goes down as a classic – not because of the result – but because of the attitude both sides had to playing. Semi-finals aren’t supposed to be necessarily games that people remember. They can be quite scrappy, quite nervy affairs with such a prize like the European Cup final at stake.

“From minute one, both teams went at it. We had a real positive attitude to go and play, and how often do you get a semi-final where the lead changes hands, I don’t know, half a dozen times at least? Where there were four yellow cards, two on both sides. There were tries on both sides, the drama, every single moment was resting on it.

“With 10 minutes to go we were staring down the barrel – I think we were about 12 points down. But we found it within ourselves to level the game and then Trevor Leota got the crucial try at the end. Fantastic atmosphere and for that reason, I remember the graciousness of the Munster fans. They must have been heartbroken after the game, another failure at the penultimate hurdle, and yet they were so gracious.

“It was one of those games that you had to applaud both sides because when the music stopped right at the end, Wasps were lucky enough to be ahead.”