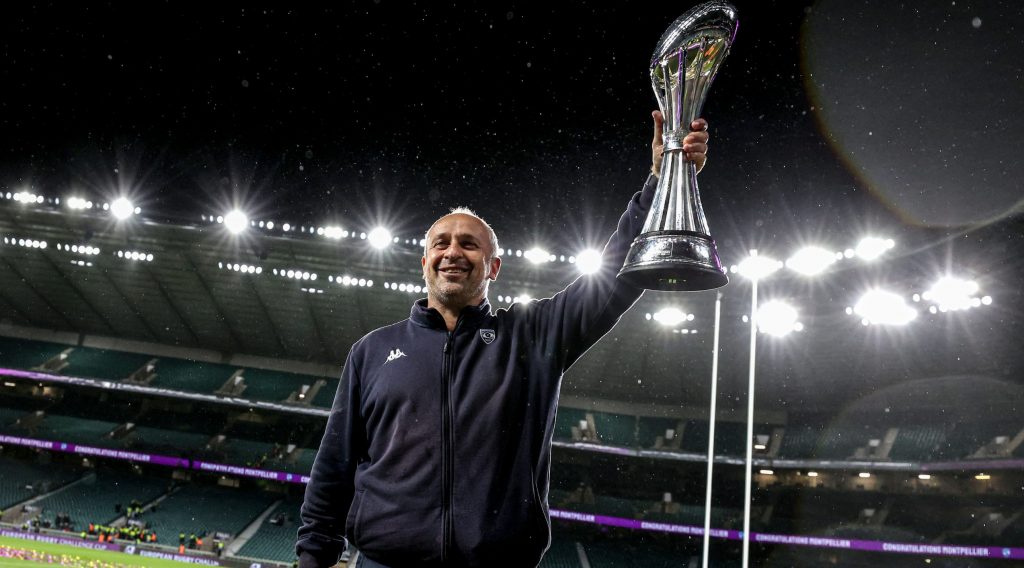 Montpellier director of rugby Philippe Saint-André has praised his side for not panicking and remaining pragmatic despite falling 17-10 behind to Leicester Tigers in last night’s European Rugby Challenge Cup final.

Leicester back-row Jasper Wiese powered over in the second half, and with George Ford landing the tricky conversion, the Welford Road side led by seven points on 46 minutes with Montpellier captain Guilhem Guirado in the sin bin.

But a settling three-pointer from Benoit Paillaugue and a stunning try from Johan Goosen on the hour-mark turned the tide and earnt Montpellier a second Challenge Cup success in six seasons at Twickenham on Friday night, coming out 18-17 victors.

“We were pragmatic tonight, but as soon as we got the ball, we were very dangerous,” Saint-André said in the post-match press conference.

“We scored two great tries, and I’d say that this squad is learning, and learning very quickly, because we lost five games late on back in January, and tonight, we were calm in the last five minutes.

Here's how it went down at Twickenham ➡️ https://t.co/y32YO12OCM pic.twitter.com/Zcz9OwWiJM

“We didn’t panic, we were patient and we did everything to win the second [Challenge Cup] title in the club’s history.

“I’m very proud of my players, of course, and I’m also proud of my coaching staff, because they’ve been exceptional.

“We had five or six guys who were highly doubtful for this game, but the medical team worked immensely hard, and Jean-Baptiste Elissalde and Olivier Azam did a superb job.”

Saint-André also praised his side for turning a campaign that included a terrible run of form around the turn of the year into a trophy-winning season, earning them a spot in next season’s Heineken Champions Cup.

“Our mindset was at rock bottom back in January, which is more or less when I arrived,” added the former France head coach. “When I took over, we lost five matches in a row, having conceded late on in those games.

“Of course, now, we’re solid defensively, and the lads are putting their bodies on the line and fighting hard for the ball.”