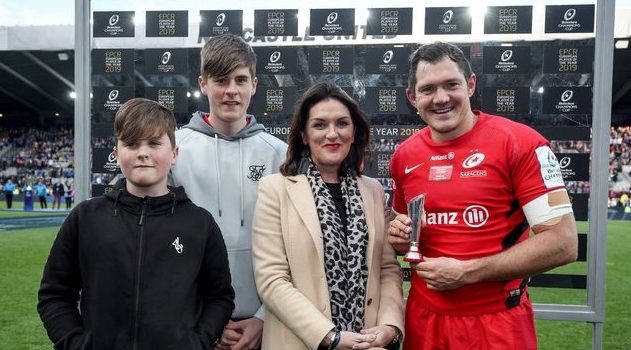 Saracens full-back Alex Goode is presented with the EPCR European Player of the Year Award by Olive Foley and her sons, Tony and Dan

Former EPCR European Player of the Year Alex Goode has returned to Saracens after a loan spell with NEC Green Rockets in Japan.

The 33-year-old picked up the prestigious EPOTY award in 2019, when he helped the English outfit secure their third European crown in four years, all of which Goode was involved in.

The versatile back has made 65 appearances in Europe’s premier club competition over a career spanning 13 seasons – notching 11 tries and 120 points in the process.

“It’s great to be in the Saracens family again and be back amongst so many good friends,” he said on his return.

“When you leave, you appreciate how amazing the club is and how big a part it has played in my life, so it’s amazing to be back. I’m looking forward to playing my part in a huge period ahead for the club.”

Saracens director of rugby Mark McCall, who guided Sarries to all three of those European triumphs, is pleased to see Goode returning.

“We are delighted to welcome Alex back to the club after his experience in Japan,” he said.  “Everyone is aware of his huge contribution to the club over the last decade and he will play a key role going forward.”