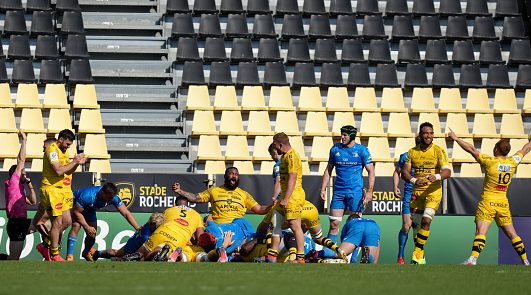 European Rugby Challenge Cup finalists Montpellier take on Heineken Champions Cup contenders La Rochelle on Saturday afternoon in what is set to be a fascinating TOP 14 clash at the GGL Stadium.

Montpellier earned their spot in the Challenge Cup showpiece final at Twickenham with a 19-10 triumph over Bath Rugby last weekend, and now have the opportunity to test their mettle against one of Europe’s finest club sides.

Both sides will be buoyed by their continental form heading into this domestic contest, with the two sides battling at different ends of the TOP 14 table – Montpellier eager to pull away from the lower reaches of the table.

La Rochelle are in a fierce battle with Toulouse at the summit of the French competition and their title rival is also their Heineken Champions Cup final opposition.

The four-time European champions travel to RC Toulon hoping to keep their Heineken Champions Cup rivals at arm’s length as their domestic campaign comes to an exciting conclusion.

Toulouse defeated fellow French side Bordeaux Bégles 21-9 in the semi-finals of Europe’s premier club competition last Saturday as they head in search of a record–breaking fifth European star.