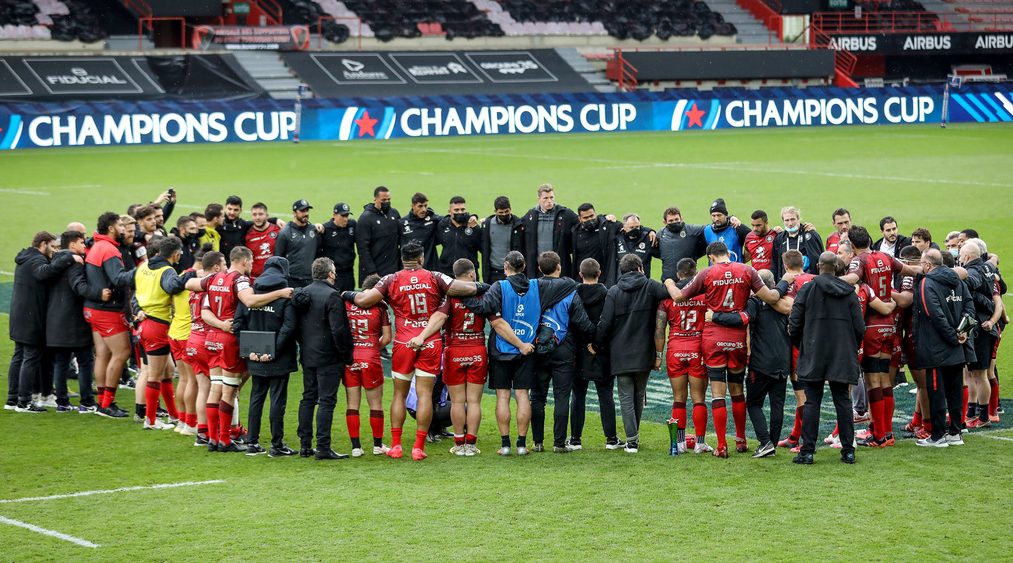 The Toulouse team huddle after the game

Toulouse remain on course for a record-breaking fifth Heineken Champions Cup triumph following a 21-9 victory over Bordeaux–Bègles on Saturday afternoon.

The victory set up a tantalising all-French finale to the competition against La Rochelle – who are searching for their maiden European triumph after a 32-23 victory over Leinster Rugby.

“It was definitely it was not the most fluent game we have played,” explained Toulouse wing Cheslin Kolbe post-victory.

“We knew we were coming up against a good team that have been in unbelievable form.

“We adapted really well. All the supporters and people at the club talk about the history of the competition.

“For us as a group we make sure we focus on what we need to do. Hopefully we can make history again.”

“We are very happy because the match was not easy,” added full-back Maxime Médard.

Final bound with the brother's 🔴⚫ pic.twitter.com/WcjkGIwr4p

Despite Toulouse’s undoubted pedigree on the European stage – having lifted four European titles to date – the club hasn’t graced the Heineken Champions Cup final in 11 years.

They will be buoyed, however, by the prospect of taking on French opposition at Twickenham – three of their four final triumphs have come in all-French finals against Perpignan (2003), Stade Francais (2005) and Biarritz (2010).

“We hope to be able to add a fifth star on our jersey,” said Toulouse head coach Ugo Mola as the TOP 14 side now turn their attention to the showpiece final at Twickenham on May 22.

“We are privileged, we have the chance to play a European Cup final.

“And as for Twickenham, what better way to play a European Cup final. I’m lucky to be at an incredible club.”