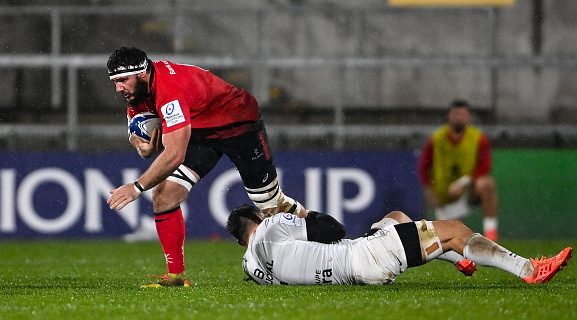 Toulouse forward Rynhardt Elstadt reckons there’s one particular ingredient you need in your side if you are to win the Heineken Champions Cup – passion.

“Every team is passionate to win it and you can just see the passion in the fans, like the way they cheer on their teams”, the South African explained.

“It’s a competition played with a lot of passion, so if I had to sum it up in one word, it’d be passion.”

The 31-year-old back-row forward has thoroughly enjoyed his four seasons of European rugby and particularly the last three in the Heineken Champions Cup.

“I’d never played in the Northern Hemisphere before,” he said. “I’m playing in my first European Cup, at the top level, playing against different players from different leagues and different international sides than in the Southern Hemisphere.

“Just to see what things they do differently, I kind of really, really enjoy it. I think it’s a faster tempo [and there’s] more rhythm to the match that I really [prefer]. There’s much more flow to the match than in the Top 14.”

Having moved to France from Stormers, the South African team, in 2017, Elstadt has had plenty of chances to get to know his teammates and he believes Toulouse have some cracking young players on their books.

“There are quite a few youngsters who have been playing really well for the French international side, like Romain Ntamack and Antoine Dupont, very young guys sticking their hands up really well,” he said.

“In the loose forwards we have François Cros, who has played a really exceptional season for us in the French Top 14, and Selevasio Tolofua.

“I really think that we’ve got a good side this year, so I’m quite excited to have our team back to its full strength and compete at a higher level.”

Elsdtadt went on to give a bit more detail on the four-time winners’ squad to ChampionsCupRugby.com.

“That’s quite a good one. There are a few guys who put in the extra work. A lot of them are the loose forwards, like Charlie Faumuina, who takes a lot of the props and does extra work with them. Around the backs, Romain Ntamack. Every day he comes in and does the extra bit of work. Zach Holmes, Cheslin Kolbe [too].”

Who is the strongest?

“Oh dear, that’s a good question. Definitely not me because I’m the guy who’s never in the gym! I would say one of them could be Joe Tekori. He’s just one massive guy. He can put any weights on and he just lifts it. He’s just enormously strong. Besides him, I reckon that some of the backs are really strong when lifting. Cheslin Kolbe is probably one of the top. He can lift more than his own body weight.”

“I think Cheslin Kolbe would be right on top there. When he runs with the ball, it’s naturally good to see.”

Who do you think would be a future coach?

“To be honest, I have no idea. I haven’t actually any coaching abilities. I think Charlie Faumuina and Jerome Kaino, Zack Holmes, oh and Louis-Benoit [Madaule] – they’ve all been doing a bit of coaching and I think everybody brings a bit of a different perspective to it.”