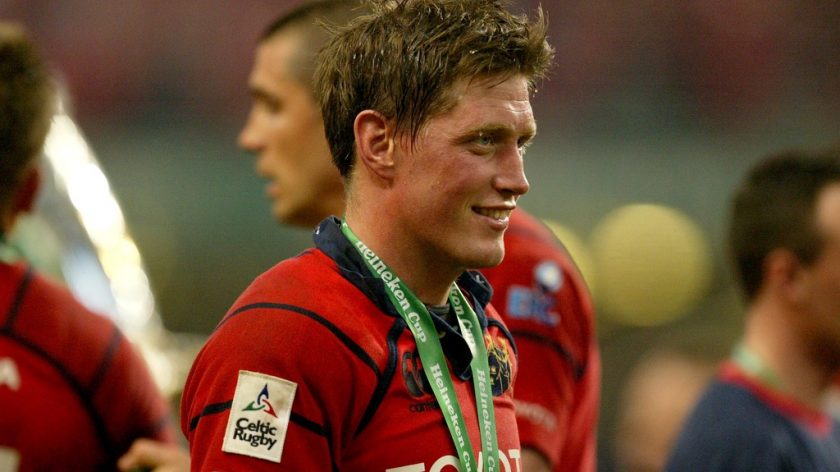 Former Munster Rugby fly-half Ronan O’Gara reveals on this week’s Champions Rugby Show the relief at the Irish province winning a Heineken Cup final at the third time of asking in 2006.

The competition’s all-time leader in points and appearances kicked 13 points in Munster’s 23-19 victory over Biarritz Olympique at Cardiff’s Millennium Stadium, having previously been on the losing side against Northampton Saints in 2000 and Leicester Tigers in 2002.

And O’Gara, now head coach of French club La Rochelle, believes that the lessons learned in those final defeats shaped the side who eventually won the trophy in 2006.

“I think the things we learned in the previous two finals helped us,” the ex-Ireland fly-half said in an exclusive interview with the Champions Rugby Show.

“I think at Twickenham [versus Northampton] we froze from a playing point of view; I think the occasion was too much for us. The night before, we had a team meeting which was too emotional. We didn’t transfer that from Friday night into Saturday.

“Against Leicester, they were a brilliant team. We lost the Northampton final, but we got beat in the Leicester one.”

O’Gara, who scored 1,365 points in 110 Heineken Cup matches in a glittering career, singled out the late Anthony Foley for his captaincy in 2006.

“Munster have had a number of great leaders and we had one of the greatest in Foley. I just remember him talking very calmly, walking on the pitch with him saying: ‘We’ve got to play boys, we’ve got to play’.

“We knew in our own minds that if we wanted to be taken very seriously, if you want to be considered the best, you have got to win silverware and that’s what we did that day.

“We went 7-0 down, in our third final, and you are kind of going ‘Oh no, it’s not meant to be’, but we focused, got back into the game, and obviously it was a very tight game, but it was a massive relief to win.”