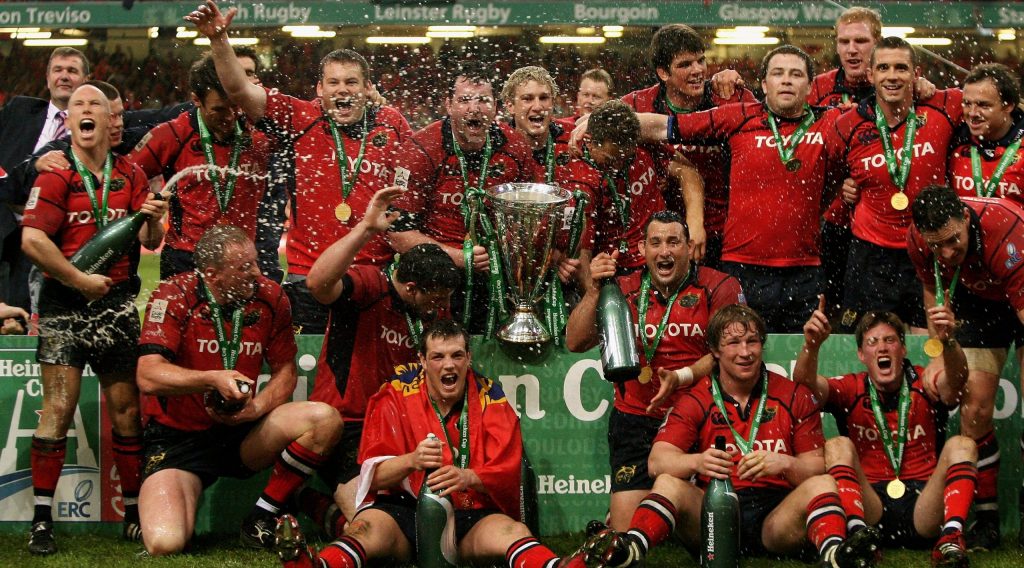 It was third time lucky for Munster 14 years ago today as the Irish province converted their third Heineken Cup final appearance into their first European title.

Munster rewarded an estimated 55,000 of their loyal fans – who made the journey over from Limerick to Cardiff to help pack out the 74,500-capacity Millennium Stadium – with a first Heineken Cup.

The Irish province resisted a fierce second-half fightback from Biarritz, which took the French club to within a point, and so erased the memory of their 2000 and 2002 final losses.

Fly-half Ronan O’Gara was their matchwinner – as has so often been the case – totalling 13 points with his conversions of tries by centre Trevor Halstead and scrum-half Peter Stringer, plus three penalties, including a crucial late kick.

Biarritz made the perfect start, Philippe Bidabe releasing wing Sireli Bobo, who raced controversially close to the left-hand touchline for the first try after two minutes. Scrum-half Dmitri Yachvili converted for the first two points of his 14-point match tally.

The @IrishRugby legend will be taking us on a trip down memory lane with a belting double-header of European classics 🔥#HeinekenChampionsCupRewind pic.twitter.com/vVwInEI1OH

However, Munster recovered from this early shock to eventually take the lead after O’Gara’s first penalty on 10 minutes and Halstead’s close-range converted try six minutes later.

Yachvili’s first penalty pulled Biarritz level, but Stringer helped Munster into a 17-10 interval lead in the 32nd minute, when he dummied left before blasting down the blindside past Serge Betsen to score a try that O’Gara improved.

The Ireland fly-half extended Munster’s advantage with another penalty straight after half-time, but three Yachvili penalties cut the deficit to a single point with 10 minutes left.

However, O’Gara’s third penalty eased the pressure on Munster and enabled them to hold out for that longed-for first European success.