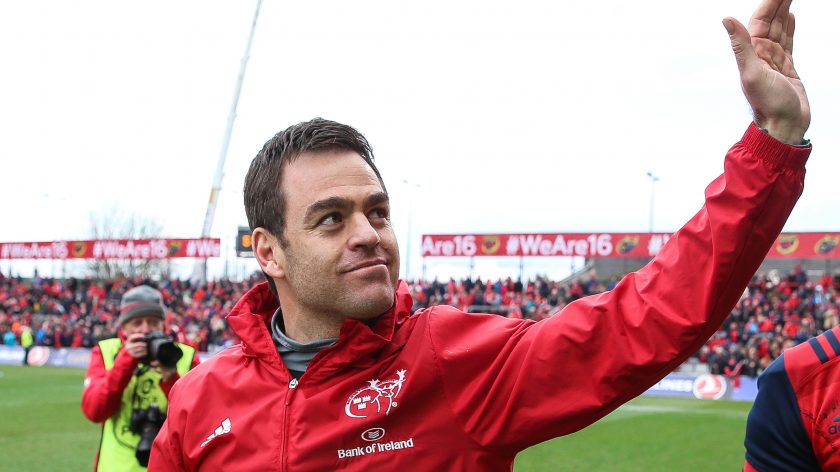 Munster Rugby head coach Johann van Graan believes the Heineken Champions Cup is “quite possibly” the biggest competition in the world after the Rugby World Cup.

The 38-year-old, who is the youngest head coach in the competition, revealed at last week’s launch of the 2018-19 tournament in Dublin that he used to watch it as a child on television in Pretoria.

“It’s a massive competition,” said the South African. “After the World Cup, I think it’s quite possibly the biggest one in the world and [given] the way that people embrace this competition, we can’t wait to get out and play in the first game.”

Reflecting on last season’s campaign, when Munster reached the semi-finals, Van Graan was proud of what his side achieved and is fully aware after his first year at Munster what European rugby means to the Irish province.

“That first game against Leicester Tigers at Thomond Park was huge for me personally,” he recalled. “You hear the singing and you hear the quietness of the people when somebody kicks to goal, but once you’re there, you’re part of it and you’re right in the middle of it – you actually see what community really is to the people of Munster.

“The quarter-final against Toulon was one of the best rugby experiences that I’ve been involved in, with two quality teams, and we were lucky to get through that game by one point.

“For Munster, the Heineken Champions Cup is huge.”

Our Champions Cup opponents have all made impressive starts to the new season with our opening game of the competition less than three weeks away!

See how Exeter Chiefs, Gloucester and Castres are faring so far > > https://t.co/4U5dSGQs6h#SUAF 🔴 pic.twitter.com/N1s9FlKmtl

Munster begin their Pool 2 campaign against Exeter Chiefs at Sandy Park on October 13 and it will be the first time the Irish province have played the English club in their history. It is a challenge the two-time European Cup winners are relishing.

“If you’re involved in rugby, you’re going to watch what the top teams do,” Van Graan said. “Over the past few seasons in England, Exeter have been brilliant – their attack is almost second to none.

“They pose a different challenge to most teams and while Munster have got a rich tradition against quite a few teams, this will be the first time [it’s] Exeter versus Munster, so I think both sides are really looking forward to that game.”

Alongside Munster and Exeter in Pool 2 are Castres Olympique and Gloucester Rugby – who are coached by compatriot Johan Ackermann.

“I know Johan pretty well,” said Van Graan. “[He’s a] fantastic coach, a fantastic man and I think he’s done really well in his small time there at Gloucester.

“They’ve made quite a few signings, they’ve got a pretty well-renowned side out there now. They’re playing some fantastic, attacking football and they also look like a team that wants to challenge, so this pool will be huge.”

An old rivalry reignites on Saturday, October 20, as we welcome English heavyweights Gloucester to Thomond Park in the Champions Cup!

It is set to be an electric occasion at Thomond with tickets still available here > > https://t.co/XJP3GFxMnG#MUNvGLO #SUAF 🔴 pic.twitter.com/EFHYTrlgRL

In his second season in charge at Thomond Park, the Pretorian says he understood the level of expectation at Munster for Europe’s elite club competition “on the first day that I walked into the club”.

“Munster has got an incredible history with the Heineken Champions Cup and the expectation is to go one better, but for us as a side, you’ve got to start on zero,” he continued. “It’s a whole new year, four different teams in the pool. I know we had Castres last year, but since then they’ve become French champions.

“Just to get out of the pool will be huge.”