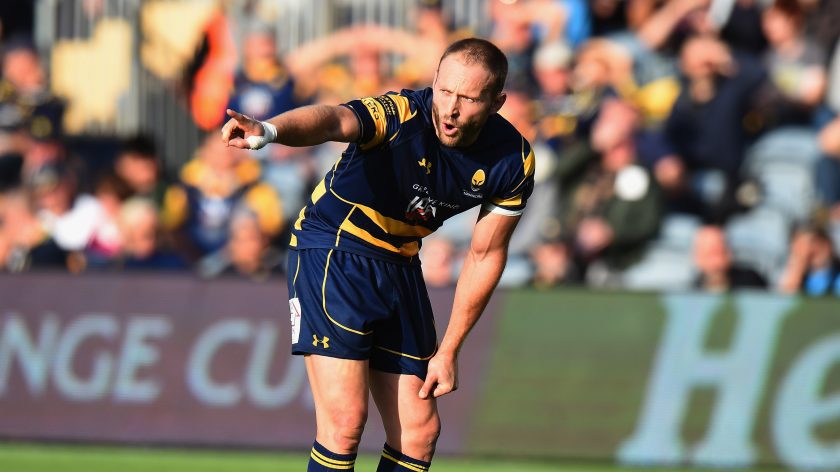 Debutant back-row Ted Hill staked a claim for a European Rugby Challenge Cup bow next month with two tries as Worcester Warriors notched their first English Premiership win of the season in dramatic fashion on Sunday.

The Warriors led 37-11 at Welford Road, before being reeled back in by Leicester Tigers, who eventually drew level at 37 apiece thanks to tries from wing Jonny May, fly-half George Ford, No. 8 Sione Kalamafoni and former Worcester back-row David Denton.

But it was the 19-year-old Hill who was the hero by diving over in the corner with seconds remaining to ensure the points would be heading to Sixways in a 44-37 victory as they jumped up to ninth in the Premiership table.

They kick off their European Rugby Challenge Cup campaign in Paris as they travel to face 2017 winners Stade Français Paris on October 13.

Feel very lucky to have had the opportunity to play alongside all the guys yesterday. #COYW @WorcsWarriors pic.twitter.com/CZcjv1PMtL

The Parisians closed the gap on TOP 14 leaders ASM Clermont Auvergne to one point after their 25-13 win at Challenge Cup rivals Pau on Sunday.

Centre Gaël Fickou ran in two tries as Stade put on a blistering first-half display to lead 22-3 at the interval, before holding off a late rally from Pau, who they will meet in Challenge Cup action on October 20.

The win came after Clermont were beaten 23-19 by Bordeaux-Bègles on Saturday at Stade Chaban-Delmas, despite the best efforts of scrum-half Greig Laidlaw, who kicked 12 points for the visitors.

The two-time Challenge Cup winners travel to face Northampton Saints in their opening Pool 1 match on October 13, before clashes with Timisoara Saracens and Dragons.

Not a bad evening for last night’s Guinness @PRO14Official man of the match @samdavey1993 💪🏉#MyTeam pic.twitter.com/MUvXh4BMkK

Elsewhere, Ospreys now sit just two points off top spot in PRO14’s Conference A after their 27-10 win over Benetton Rugby on Saturday.

Ospreys have only featured in the Challenge Cup on one occasion, having reached the quarter-finals in 2017 before being beaten by eventual winners Stade Français Paris 25-21.