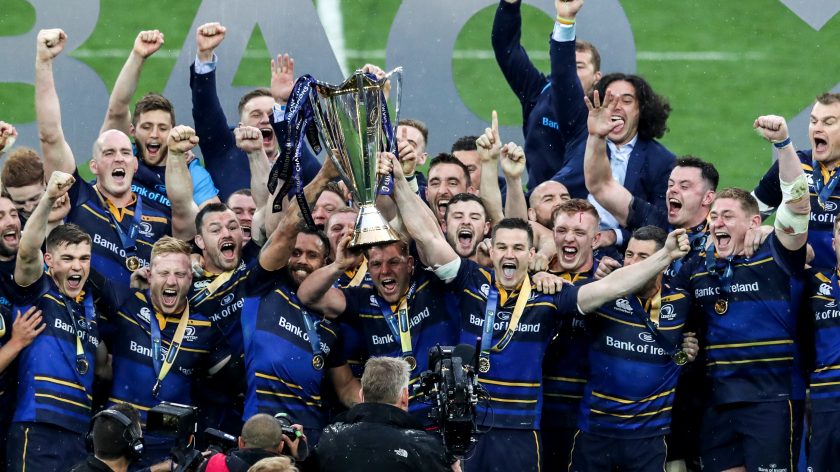 With six Leinster Rugby players returning to Ireland’s starting XV for Saturday’s second Test against Australia in Melbourne, we take a look back at their record-equalling four European Cup final victories.

Drop goals from centre Brian O’Driscoll and fly-half Johnny Sexton put Leinster ahead, but Leicester came roaring back with a try from wing Ben Woods and two penalties from scrum-half Julien Dupuy.

Momentum swung back in the Irish province’s favour after Leicester captain Geordan Murphy came off injured, and they took full advantage with back-row Jamie Heaslip finishing a power-packed move to draw the sides level.

Sexton missed a penalty late in the second half but was handed another chance with 10 minutes to play and made no mistake this time as Leinster held on to clinch a maiden European Cup.

ICYMI: @LeinsterRugby, @Saracens and @CastresRugby will be guaranteed top seedings when the pool draw for the Heineken Champions Cup takes place on Wednesday 20 June.

Tries from front-row Phil Dowson, full-back Ben Foden and front-row Dylan Hartley gave the English side a 22-6 lead at the interval.

But it was the 2009 champions who launched a thrilling comeback through Johnny Sexton, who scored two tries and added a further 12 points from his boot as Leinster scored 27 unanswered points in 26 second half minutes.

Leinster lock Nathan Hines also dived over for a try as the Irish province eventually ran out winners by 11 points in a vintage European Cup final.

Forwards Sean O’Brien and Cian Healy scored first half tries to give Leinster an eight point cushion at the interval, before replacements Heinke van der Merwe and Sean Cronin dotted down in the second period.

Ulster’s Dan Tuohy scored a late try but it proved to be nothing more than a consolation as Leinster cruised to victory in front of a record final crowd of 81,744.

The success meant Leinster became only the second team, at the time, to have successfully defended their crown alongside Leicester Tigers.

While the match passed without a try, it wasn’t lacking in drama as two outstanding defences held firm throughout, putting a premium on goal-kicking.

Scrum-half Teddy Iribaren kicked all 12 of Racing’s points as Pat Lambie was injured in the first two minutes of the match, but it was Isa Nacewa – playing in his final Champions Cup match before hanging up his boots – that became the Leinster hero.

With Johnny Sexton nursing a slight injury, Nacewa was tasked with kicking two penalty goals to clinch the match for Leinster in the final eight minutes and he duly delivered, much to the delight of the travelling Leinster contingent.