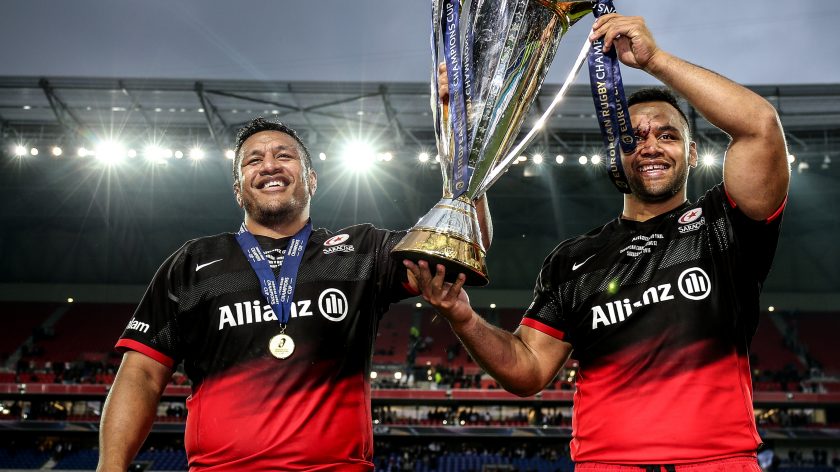 New Zealand’s historic selection of the three Barrett brothers for the All Blacks’ Test against France on Saturday got us thinking about siblings that have played in the European Cup or European Rugby Challenge Cup competitions. Here’s our starter for ten and let us know more on our social media channels!
Mako and Billy Vunipola
The Vunipola brothers are most well-known for their hard carrying and physicality for Saracens, and celebrated a Champions Cup double together with the Allianz Park side in 2016 and 2017.
Prop Mako, 27, has made 46 European Cup appearances for the English club between 2012 and the present day, while No 8 Billy, 25, has featured 36 times in the competition in the same period for them.
Dave and Rob Kearney
The Kearney brothers have also won European honours together, both being part of the Leinster squad who lifted the 2012 European Cup and 2013 Challenge Cup.
Dave has featured in 21 European ties between 2012 and the present day while Ireland full-back Rob has amassed 76 appearances across 13 seasons.
[jwplayer 6PDKwxqb]
Rory and Simon Best
Ulster and Ireland captain Rory Best has appeared 68 times in the European Cup for the Irish province between 2005 and the present day, compared to prop Simon’s 39 matches in the competition between 1999 and 2007.
They packed down together a total of 13 times in European action – in 2004/05, 2005/06 and 2006/07 – before Simon announced his retirement from rugby in 2008 due to an irregular heartbeat.
Lee and Karl Dickson
The Dickson brothers both represented English clubs in Europe with scrum-half Lee having won 18 caps for England while with Northampton Saints, for whom he played nine consecutive seasons of European rugby between 2009 and 2017.
Meanwhile, Karl, who is now a professional referee, enjoyed eight successive European campaigns with Harlequins.
Max and Thom Evans
The Evans brothers played alongside each other seven times for Glasgow Warriors in the European Cup in 2008/09 and 2009/10, before Thom was forced to retire in 2010 after suffering a neck injury while playing for Scotland.
They were in the same Warriors team who faced Toulouse and Bath Rugby in 2008, Toulouse, Dragons and Gloucester Rugby in 2009, and Dragons and Biarritz in 2010.
Ethan and Alex Waller
The Waller brothers also played in the same team in the European Cup, for Northampton Saints, before Ethan left for Worcester Warriors in 2017.
Altogether the two props appeared 20 times alongside each other in four seasons – from 2013/14 to 2016/17 inclusive.
Nick and Mark Easter
Nick won 54 caps for England and was a stalwart of the Harlequins back row on the European scene between 2004 and 2016 in both the European Cup and Challenge Cup.
Mark was also a back-row forward, for Northampton Saints and Sale Sharks, and played in both competitions as well between 2006 and 2016.
Jonny and Mark Wilkinson
Jonny Wilkinson was a two-time winner of the European Cup with RC Toulon, but before the former England fly-half moved to France, he did link up with his older brother, Mark, at Newcastle Falcons.
They played three matches alongside each other in the Challenge Cup between 2002 and 2005.