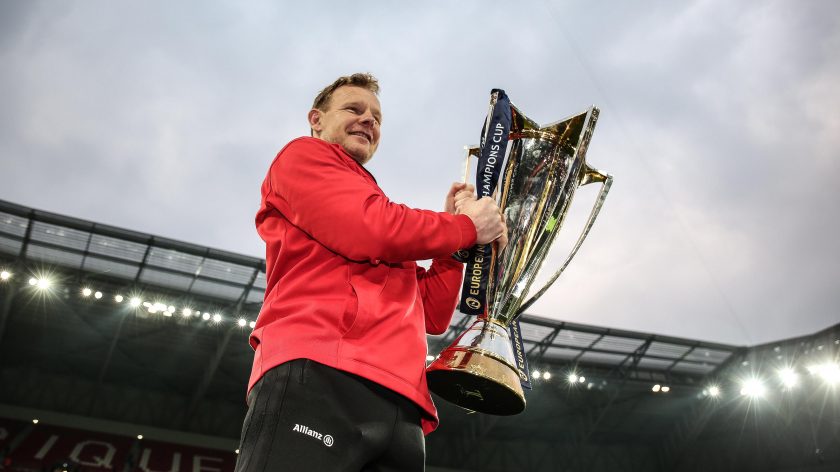 With Saracens captain Brad Barritt and coaching team – led by Director of Rugby Mark McCall – having extended their contracts with the Allianz Park side, we take a look back at some of their greatest European moments.

Mark McCall’s side picked up his first European Cup win in a knock-out match in 2013 after a 27-16 victory over Ulster at Twickenham.

Brad Barritt started at No.12 but it was fly-half Owen Farrell who stole the show, scoring 17 points on the afternoon in addition to tries from back-row Will Fraser and wing Chris Ashton.

They returned to Twickenham for the semi-finals, but were beaten 24-12 by eventual winners RC Toulon with fly-half Jonny Wilkinson kicking all of the French side’s points.[jwplayer 7ZV37GzN]

Twickenham was again the venue for one of Saracens’ best performances in Europe as they clinched a place in the European Cup final with a 46-6 win over ASM Clermont Auvergne in the semi-finals.

Chris Ashton scored a pair of tries as Saracens romped to a six-try success over the side who they would go on and conquer in the 2016 final.

Mark McCall described it as a ‘phenomenal performance’, but they were unable to back it up in the final at the Principality Stadium. Toulon were again the side to inflict European pain on Saracens, coming out 23-6 victors in Cardiff.

Brad Barritt captained Saracens to a first Champions Cup success as they defeated Racing 92 21-6 in a tactical affair at the Grand Stade de Lyon.

Owen Farrell kicked all of the points for Saracens, who were able to control the match throughout despite the best attempts of Racing 92 fly-half Dan Carter.

That win also meant Saracens were the first team to go through a nine-match Champions Cup campaign without defeat.

💬  Mark McCall: "Since Brad joined in 2008, he has made an extraordinary contribution on and off the field. He leads by example and is hugely respected by his teammates and staff." pic.twitter.com/rCQZpHd93t

Early tries from Chris Ashton and lock George Kruis pushed Saracens into an early lead before scrum-half Morgan Parra kicked nine points to keep the French side in touch.

Saracens full-back Alex Goode broke clear to score a third try on 72 minutes to end any hope of a Clermont comeback and help clinch a second European success.