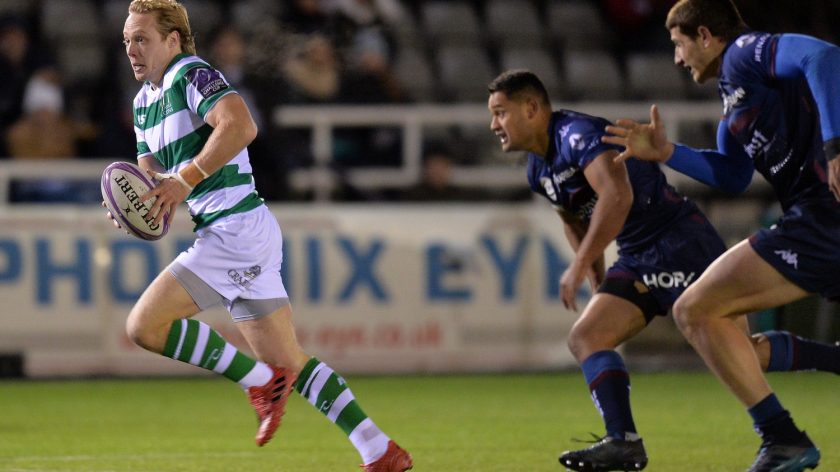 The Falcons, who host Brive on March 30, had to endure a long coach journey to the South-West on Friday after their flight was cancelled due to the weather and then helped Gloucester's groundstaff and volunteers clear the Kingsholm pitch of snow.

The visitors' hard work was rewarded when they secured their sixth Premiership away win of the season through tries from flanker Ally Hogg and scrum-half Michael Young, plus 11 points from the boot of fly-half Joel Hodgson, to stay in fourth.

Gloucester, who travel to Connacht Rugby in the quarter-finals, notched a bonus point thanks to tries from full-back Jason Woodward, wing David Halaifonua, centre Mark Atkinson and replacement Lewis Ludlow, but their failure to convert any of them cost them victory.

Fantastic win away from home on the @gloucesterrugby 's field. one more step ! Proud of all the team ??????#GoFalcons #KeepWorking pic.twitter.com/yhLVsn9ALN

Connacht also lost narrowly in the Guinness PRO14 on Saturday, going down 26-25 to the Toyota Cheetahs in South Africa, where a 79th minute penalty from Niel Marais sealed their fate.

Two tries from winger Matt Healy and one from Eoin Griffin, combined with two penalties from fly-half Jack Carty, looked to have sealed Connacht’s second win on the road, but it wasn't to be.

Homeward bound… our tour has come to an end ?? Some battered bruised bodies after a tough game last night #ConnachtOnTour pic.twitter.com/3r6ya1AQg2

In France, Pau climbed into fourth place in the TOP 14 with a 29-27 win at Castres, their first success there for 44 years, their seventh victory in a row and their third in succession on the road, with a home Challenge Cup quarter-final against Stade Français Paris approaching on March 30.

Former New Zealand fly-half Colin Slade was Pau's match-winner with 14 points from a try, three conversions and a penalty.

Stade Français Paris' relegation worries increased as they slipped to 12th after a 33-27 loss at bottom club Oyonnax, while second-bottom Brive went down 17-13 at Racing 92.

In other news, versatile back Juan Pablo Socino will join Edinburgh Rugby at the end of the season from fellow Challenge Cup quarter-finalists Newcastle Falcons.

The 29-year-old said: “I'm thrilled to be joining Edinburgh next season in what I believe is an ambitious project that I can't wait to get stuck into.

“Edinburgh is a great city with a huge rugby culture and I want to contribute to that with everything I can.”