Mont de Marsan back in the big time 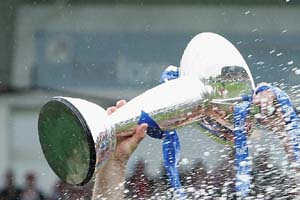 Mont de Marsan return to the European Challenge Cup at Saracens on Sunday – and no-one in the Vicarage Road crowd is likely to follow events more closely than legendary French threequarter Thomas Castaignede as two of his former clubs clash in Round 1.

The French club, who have qualified for Europe for the first time since 2002, find themselves up against last season’s Heineken Cup semi-finalists in what promises to be a tough debut.

“We are extremely proud to be in the European Challenge Cup,” said Eric Lamarque, the club’s Director of Rugby.

“It is an honour to have been invited to join some of the elite teams we are going to be playing against and we have a proud cup history with our performances in the Yves du Manoir trophy which used to exist back in the amateur days.

“But it is difficult to talk about the game against Saracens as there is no way you can compare a club like ours with a club like theirs. We are very aware of the massive challenge which we face and obviously one of our most famous sons, Thomas Castaignede, played there for many years and both Thomas and his father played rugby for Mont de Marsan so it is a bit of a family affair.

“Saracens are a very physical side and we know they like to work the ball hard in the forwards. In terms of our own game, we have stuck to our roots and like to play expansive, attacking rugby – so our game couldn’t be much further away from that of our opposition.

“It will be a very proud day for all of us on Sunday at Vicarage Road when we rub shoulders with some of the greats of European rugby.”

Mont de Marsan will also be up against Bayonne and Viadana in Pool 5.

“Obviously Mont de Marsan is not well known in Europe today, but our club has recently celebrated its centenary and during the amateur era we were at the height of French rugby and have brought on many, many French international players over the years and we were also at the forefront of the development of the game back before professional,” he said.

“The advent of professionalism made things very difficult for teams like us, who are from a town of only 35,000 people, and we have worked very hard over the last two years to re-structure our club in order to rise again in this new environment.

“Getting promoted to the Top 14 was a fantastic achievement for us but Top 14 survival is not the be-all and end-all for us.
“We are more interested in developing into a sustainable, balanced club which can be successful as a professional club and being in the top division of French rugby is not more important than that for us.”