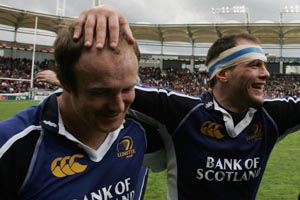 Leinster and Ireland wing, Denis Hickie has announced that he will retire from professional rugby immediately following the Rugby World Cup.

Hickie, who to date has won 58 caps for Ireland since his try scoring debut against Wales in 1997, was this week named in the Ireland squad for the Rugby World Cup.  The winger has scored 29 tries so far for Ireland and on several occasions has held the Irish try scoring record, vying for the title with his Leinster colleague Brian O’Driscoll, who is also currently on 29 tries. His abilities were further honoured with his selection for the British & Irish Lions tour to New Zealand in 2005.


Wearing the blue of Leinster, Hickie earned an ERC Elite award for having played over 50 games in the Heineken Cup.  In a total of 54 European games for Leinster the winger scored 19 tries and featured in two Heineken Cup semi-finals for the Irish province in 2003 against Perpignan and 2006 against Munster.

Speaking about his decision, Hickie said, “I have had a very enjoyable and fulfilling career as a professional rugby player.  I entered the senior ranks at the dawn of the professional era and benefited from all the advances made in that time.

“I have now decided that the best time to end my career is immediately after the upcoming World Cup.

“It is a decision that that I have not come to hastily and as a result I am content that it is both the right thing for me to do and that I am doing it at the right time.

Leinster Chief Executive Michael Dawson commented: “Denis Hickie has been an outstanding ambassador for Leinster and Irish rugby since making his debut for the province back in 1996. He has gone on to become one of the province’s most decorated players of all times, amassing a total of 130 Senior appearances and his try-scoring ratio, a fraction shy of one every two games, is second to none on the world stage.

He has shown immense drive, hunger and resilience throughout his career and I know that this decision can’t have been an easy one for him to make. Obviously we are disappointed to lose the services of someone of Denis’ calibre, but everyone at Leinster Rugby accepts his decision and would like to wish him the very best of luck in his future career.”

Leinster coach Michael Cheika added: “Denis has been a key figure for Leinster during my time as coach over the last two years. As one of the squad’s senior players, his influence in the development and change within our squad has been huge.

He has comeback from serious injury to make strong contributions to our team and for that we thank him. On behalf of myself and my team, I would like to acknowledge all his efforts over the course of his career and wish him well in the upcoming World Cup and for his future away from the game.”