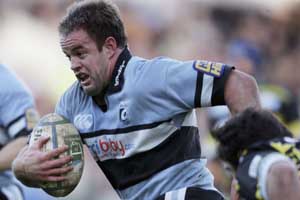 Xavier Rush will retain the Cardiff Blues Captaincy for the 2007/08 season as the Blues face Bristol Rugby, Harlequins and Stade Francais in Pool 3 of the Heineken Cup.

Speaking after a gruelling hill run session at Castell Coch, Xavier confirmed he would carry on the role he performed with distinction last season.


“I had a chat with Dai about the Captaincy and it was something I wanted to continue with. It’s a big responsibility to have but one that I’m comfortable with. We managed to finish second in the league last season and are obviously aiming to improve on that this year,” said Rush.

“We said at the end of last season when we were challenging for the Magners League that we were definitely not the complete package yet. I think we’ve been steadily climbing the ladder and our performances have been improving. I think we are about 20% off where we need to be to challenge the top teams.”

The Blues will face Bristol, Harlequins and Stade Francais in the Heineken Cup and Rush feels the Blues can challenge strongly in the pool stages.

“We have a pretty even group in the Heineken Cup, where a lot of the teams can beat each other. I think it will be the case of who ever can play the better rugby at that time of the season, but obviously we want to get through to the next stage of the competition.”

“We’ve doubled our Kiwi quota at the Blues which is great for me. I think Ben Blair has made a big difference since he arrived and I think having a Paul Tito and Jason Spice will also make a big difference. I think you need a bit of that overseas influence to compete with the top sides these days.”

The Blues squad will have a week’s annual leave next week before heading to Ireland for training camp. Before they leave Rush will also be celebrating his 30th birthday on Friday.

“I’ve been up and down about it and taking anti depressants. It’s not a birthday I was looking forward to,” joked Xavier.

“On a serious note, it happens to every good man. I feel I’m going in to manhood and leaving adolescence behind. I feel like I’m growing up at last.”